I created this mingle page a while back and am just getting to post it now!! I used the altering technique I described earlier for the transparency. Sanded the backs of them so they could be coloured and altered to suit my layout. I used stamp pads to alter these ones. The quote is handwritten and I used my double sided tape on these transparencies as well. I am very happy with this new tape. I used packaging as the base of this page and it worked out very well.
Be on the look out for items you can use in your art that are readily available in your home - decorative cardboard, clear plastic, printed images, colourful backgrounds, etc. I usually evaluate whatever is being routed to the recycle bind for art potential!! 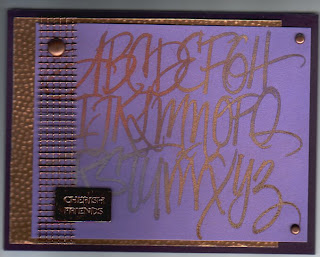 For the card exchange with my stamping group I decided to try a new Pearl Ex technique from the Technique Junkies Newsletter!! It took a few tries to get it to work out as I wanted it to but I am very happy with how they turned out. I applied the Perfect Pearls to still warm clear embossing powder. Because my image was so large I had to do it a piece at the time so I applied several different colours of mica powders. I heated the EP again so that the mica powder would incorporate and become permanent. Really love the look of it!! Not wanting to cover up too much of the image I added some copper decorative paper (gift wrap), some copper brads and some mesh which had been embossed with copper embossing powder!! The copper metal embellishment was just the perfect thing to finish off the card which I applied with a bit of hot glue to hold the mesh and 3D foam tape for a bit of pop!! Really happy with the way this one turned out so I made two more for my other card exchange!! 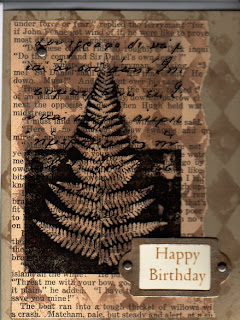 We played with some altering techniques for this card. Stamped harlequin background (SU) onto the card front as well as onto an old book page with walnut ink. Trimmed the page to fit on the front of the card. I created a torn edge on the right hand side. Over this I layered a transparency which I printed with my laser printer and some images from the internet. This leaf one is from Trish Bayley. I also used a light house, a woman with a child, the Eiffel tower (Brenda Braun) and a scene with an old automobile!! To allow the transparency to be altered I sanded the back side so it would also accept walnut ink. Everyone enjoyed the process of adding walnut ink to their pieces!! You could use acrylic paints or pads and/or reinkers instead of walnut ink. Certainly using a different colour would give the card a totally different look. I used some new double sided tape on the back in the dark areas and it did not show at all on the front side. To secure it on the bottom corner I overlayered a book plate with greeting and attached it with brads. Added another brad to the other corner to have it well attached. It is fun to alter items and add them to your cards. The bookplate was cut from silver foil which I sanded and painted with burnt umber acrylic paint. I sealed the paint with clear acrylic finish to make it more permanent. Try your hand at altering some of your regular supplies to get a more antique look. 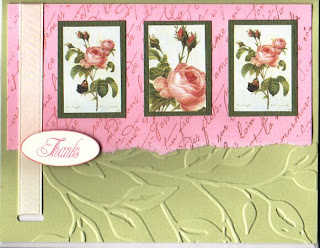 Love this card!! I used a NEW CB embossing folder with leaves which I bought at Stamplicity in Port Colburne when I we were in Niagara Falls with my sister!! Really like this embossing folder!! The rose images are stickers which I have had for while now and they worked out so well on this card!! The pink/script layer is torn to meet the embossed leaves. I added a ribbon and a colour printed greeting with 3D foam tape. 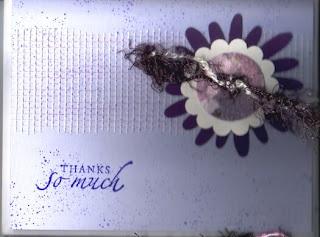 I added texture to this card with "mesh" which is adhesive drywall tape!! You can usually buy small rolls at a Dollar store if you don't have some hanging around the garage like we have at our house!! The card front was stippled with a stipple stamp (SU) in coordinating ink and the mesh applied. We used pencil crayons on it to add colour and some depth. It worked so well. The flower die cut is embellished with a punch shape and a collaged handmade paper button which I created using a 1 1/4" punch and 1/8" punch. They looked really cool!! I tied some coordinating fibers into the button and just layered all the die cuts to each other and glued the embellishment to the card front with hot glue so it would attach well over the mesh. Brought several greetings so participants could choose what worked best for them.

Therese
Posted by Therese at 9:43 pm No comments: 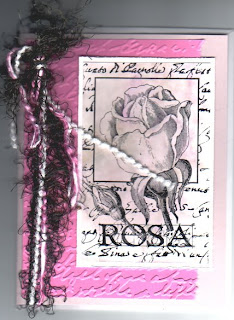 Cardmaking for October has come and gone!! This was a fun card to prepare - no kits were the same!! I embossed backgrounds using several different Cuttlebug embossing folders and stamped images on decorated glossy cardstock in Memories ink or embossed them with metallic embossing powder. The image was layered on the card front and the insert glued to the inside before I tied on the bundle of fibers!! These cards were a lot of fun and it was fun to see how all the different images and colour combinations came together!!

Therese
Posted by Therese at 9:36 pm No comments: 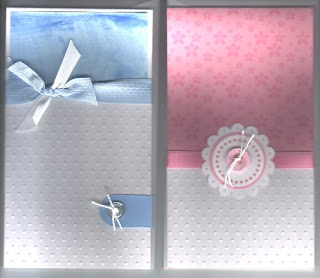 Have been making baby cards!! My neighbour had a baby boy in early October and my friend's neice had a baby girl a few days later so I made up some cards to give as gifts!!

For the blue cards I made up some decorative paper with acrylic paint and added some pearly paint to give it some sheen. Cut it to fit on the top of an #8 card and added some white embossed cardstock (CB swiss dots) below that. Added a ribbon in blue with a piece of white tied in. Saw that recently on card and thought it was cool!! Added a rectangle which I cornered rounded and folded over the edge of the card embellished with a button and some pearly thread.

The pink cards are made up from some duplex colour printed cardstock I made up a while back. Added some embossed cardstock (CB swiss dot) below that with a strip of cardstock between the two. The embellishment is a punched scallop (SU) with the scallops pierced with a push pin. Added a layer of pink (1 3/8"), a stamped circle of dots punched with the 1 1/4" punch (SU) and a pink button tied with pearly thread in the middle of that!

My sister has been visiting and this was one of our crafty projects for a day!!

We also spent an evening refurbishing Christmas cards for our soldiers in Afghanistan. One of the girls here is collecting cards to send over so they can send them home to their families. We made them all appropriate for kids knowing that those might be in short supply!!

Therese
Posted by Therese at 9:22 pm No comments: