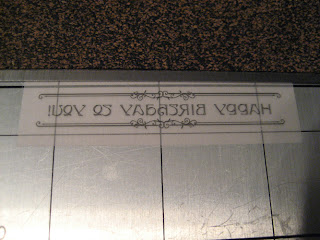 Vellum stickers!!  Who would have considered that you could create your own??  I certainly had not until I wrestled with getting the look I wanted on those vintage cards!!  I laser printed my greetings on vellum, cut them apart and applied double sided tape on the back of them!!  That easy!!  Though I must point out that you have to have a continuous layer of adhesive on the back of your vellum to get a nice smooth look when you apply your sticker to your surface.  As you can see from the photo I used a metal ruler to hold my little piece of vellum in place which also gave me a line to work from when I was applying my double sided tape. I used double sided tape with a paper backer which makes it easier to trim and apply.  I trimmed the vellum to the edge of the tape so I would get the seamless look I was going for.  I expect you could carefully apply several lines of tape on a larger piece of vellum and get the same effect.  Wider double sided tape would also be beneficial!!
So I anticipate using this technique again!!  There are times you just want sticky vellum and nothing else will do!!  Give it a try!! 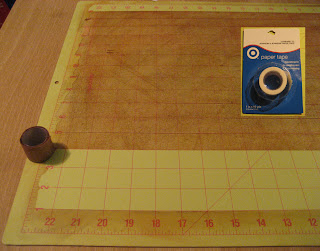 So here is how I created my vintage looking "washi" tape!  I started with paper tape which I bought at a discount store, which is designed for keeping bandages in place.  I applied lengths from the roll to my large cutting board and started adding colour using permanent Memories stamp pads.  The ink beaded up so I added a bit of water with a foam brush which helped to spread the colour around.  I added several layers in several different colours and then stamped all over it using a large "worn" background stamp.  It was taking a long time to dry so I eventually just rubbed off what I could with a paper towel and decided I was done.  As you can see, the tape did take on some colour - it was less obvious when they were all side by side on the cutting mat.  I simply rerolled the coloured paper tape back onto the roll it originally came off of.  I am pretty happy with my first attempt at making my own "washi" tape.  Because this paper tape is somewhat resistant to inks I decided to use acrylic paints on my second attempt.  It was more successful though it still resisted the colour washes in the beginning - a thicker consistency seemed to work better.  The second one I created was for use on the butterfly and bee cards.  I will keep experimenting!!  I expect this substrate will not work very well for creating the very bright and fun types of washi tape that is all the rage at the moment.  There are other options to consider and try!!
A fun project!  I am looking forward to using my tape in my projects!! 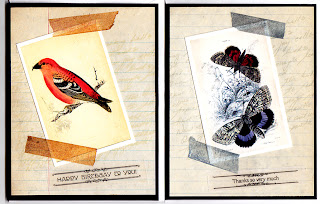 Don't these look like they were taken from a vintage scrapbook??  I found these great images at Graphic Fairy and thought it would be fun to see if could create cards with them.  I love the soft colours and the beautiful edges.  I had also wanted to try my hand at creating my own "washi tape" so I decided to combine them into a vintage card.  I went looking for a vintage ledger paper graphic or something similar to layer my image on.  Not happy with much of what I found I asked my DH if we had any fullscap, which I intended on aging.  As it turns out, we have a stash of fullscap and some near the bottom of the pile was nicely yellowed and perfect for these cards.  The fullscap is vintage!!  Probably from our high school years!!  I scanned several pieces before I used it, in case I ever need it again - I will be able to print my own.   Once cut to size for backgrounds on a black card front I stamped them in light ink to mimic old faded handwriting - really happy with how that worked out.  Then to complete the look I needed some old looking tape so I created my own vintage looking washi tape using white paper tape.  I will include more info in my next posting.  To finish off my card I wanted a bit of a Victorian greeting but had nothing that would really do, so again I decided to create what I needed.  Combined some neat fonts with some scrollwork graphics from my clipart and I had some Victorian greetings I was happy with.  Now, to get them onto the paper without it looking like they had been added.  I eventually decided to create some vellum stickers which did the job very nicely!!  Check out my next posting for more info on how I did that!!
So in the end, some vintage looking cards that I am happy with!! 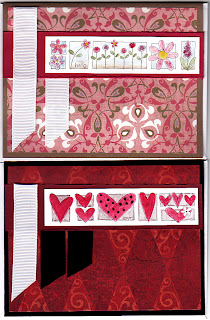 These cards feature a stamp set called "A little bit of happiness.." by Stampin UP.  Four stamps in the set - flowers, butterflies, hearts and leaves!!  I stamped them out onto white cardstock using Staz On ink and trimmed them to size.  I watercoloured the images, layered them onto slim rectangles of cardstock that coordinated with my decorative paper which was glued to my card front.  I added a couple strips of ribbon which I adhered with double sided tape to finish the card. I may consider adding a greeting in the lower right hand side when I am ready to use the cards!!

A handmade card is like giving love in an envelope  - everyone should do it!! 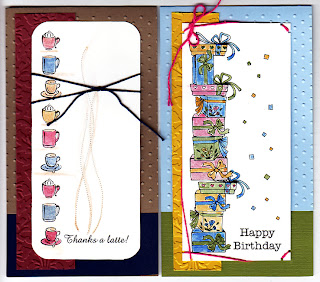 After seeing a card on Splitcoast Stampers that had a repeated image up the side I decided to see what I could do to make one that was similar.  They had used a bird but I decided I would like a cup.  Not having a stamp that was small enough I decided to check out the clipart section of my layout program - Corel Draw.  Oh my!!  Needless to say, I found what I needed and more!  Look at that cool stack of gifts!!  I created one with hearts for anyone who needed a Valentine's card and created a horizontal one with little houses!!  I had not expected to create four different designs, but that is the way it often goes once you get started!!  I added a bit of embossing, simple layering and a little tie for dimension onto my watercoloured image and it was done!!
These were really fun to create!!
Therese
Posted by Therese at 9:02 pm No comments: 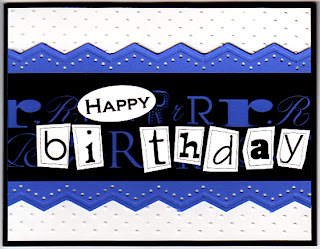 I am back to my cardmaking sessions!  I had a great time designing cards this week!!
These "R" tape cards turned out so neat.  What is "R" tape you ask?  Well, before Christmas I picked up a roll of "R" tape at the craft store in the discount bins.  I was not sure what I was going to do with it but they had lots of rolls with all sorts of letters on them.  I decided on "R" because it can be word as well as a letter!!  It is 2" wide and has a black background and clear letters!!  How cool is that?? I was sure it would be great fun for using in mixed media and journalling,  but this week I was prepping card kits. so I thought I would see what I could come up with!!  I glued a strip of tape to a quarter sheet of colourful cardstock and 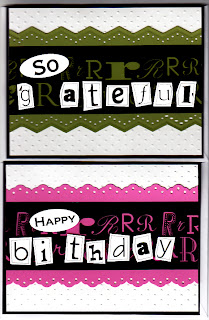 then trimmed the top and bottom so they would be even with the edge of the tape and squared off the ends if they needed it.  Tape can have a mind of its own sometimes!! I finished off this layer by punching the edges with a border punch.  Then, I decided to add a greeting and incorporate one of the "R"s from the tape into it.  I used a font called "Kidnap" to generate the other letters I needed and created a word oval, as well.  Once the letters were cut out I auditioned them on the tape to see which "R" would incorporate best into the greeting then attached the letters using 3D foam tape.  I placed the little word oval just above the "R" to help the greeting read properly.   Layered this great greeting over an embossed layer then onto a black card front.
I love the way these turned out!!  They are just a bit funky and would be great to give to a teenager!!

Therese
Posted by Therese at 8:44 pm No comments: