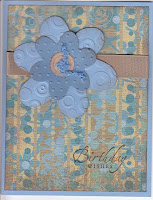 Birthday card for a friend!! I was prepping card kits for this card when I needed a birthday card last week so I just made this one up using die cuts instead of a silk flower!!
I took a bit more time and embossed the die cuts, sponged around their edges and add a little die cut button with fiber to the middle!! Nice to be able to stamp the greeting right onto the card front!!
We need to celebrate our friends and be sure they know we are thinking about them! A handmade card does that so perfectly!!
Therese
Posted by Therese at 10:31 am No comments: 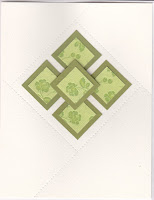 I created some tiles to play with!! They are composed of a 3/4" square of decorative paper over a 1" square of cardstock!! You could use them using the same design as this card for a different look. I brainstormed different layouts by changing the position and number of tiles until a I had a page full in my page layout program!! Amazingly, layouts using 5 tiles dominated so I gave each person 5 tiles to use on the front of their card!! The easiest layout is the green one - four to create a diamond below and one raised with 3D foam tape in the center. It allows you to create a portrait or landscape card and embellish it as you wish. I added some textured lines to mine using an old tracing wheel!! In the card on the upper left I added some textured lines on the card front which I used as guidelines in the placement of my tiles. Once they were all glued in place I added a couple more lines and some black 1/4" punchies which were left over from this card last month. The girls at class came up with yet more designs than I have included in the following diagram that you can use to get you started!!

This design, as well as the first one, with the punchies, are great ones for using scraps - especially the little wonderful little pieces you have been saving because they are too pretty to recycle or throw out!! This is a great way to use them and make wonderful cards for gift giving at the same time!! Consider using gift wrap, junk mail or any other beautiful paper that shows up to create these!!
Therese
Posted by Therese at 10:06 am 1 comment:

More quick & easy!!
A layer of decorative paper, ribbon and a 3D embellishment!! I glued the decorative paper to the card front, positioned the ribbon gluing both ends to the inside of the card and added the layered silk flower embellishment!! On the second one, I used a corner rounder on all the corners - softens the look a little!!
Thrifty tip: I buy silk flower stems and take them apart!! It will save you money and give you more flexibility when creating your embellishments!!
Don't have silk flowers?? Use stamped images, stickers, glittery die cuts or punchies, chipboard, colour printed images, etc.
You can make a set of six cards using one 12"'x12" sheet of decorative paper and three sheets of cardstock!! Consider varying the cardstocks and ribbon to ensure that the cards coordinate but are not all the same!! Package them in a cool little note holder like this one or this one!! Links - right hand side OR labels - "cardholders"!
Have fun!!
Therese
Posted by Therese at 9:48 am No comments:

Cute little sail boats!!! I saw a similar card on Splitcoast and worked out how to make the little sail boat using a circle punchie and a rectangle of decorative paper!!
For the boat I used half of a 1.75" punchie (SU) for the bottom.

I used a 1.25" x 1.5" rectangle of decorative paper for the sails. First I cut it diagonally - that created the large sail. Rotated the second triangle until the right angles lined up and then trimmed the long side again to shorten the sail so it was
balanced in compared to the large one!!
Check out the diagram for a visual which shows what I did more clearly!!
I cut a little red triangle to be used at the very top of the sails! these were glued to a white layer that had a laser printed greeting. Some chose to create on the blank side instead so they could add their own greeting or just added bit of a wavy line instead!! One person added some seagulls too!! Very creative!!

Thrifty tip: See those cool "ticket" corners?? I cut those with my half inch punch!! Simply insert the corner of your layer into the punch until you have as much showing as you want to snip off!! To be able to make all four corners the same you need to have a gauge!! I created a gauge by marking the bottom of the valleys on the inside of my punch mechanism with a sharpie marker!! See the image farthest on the left. It works really well. This morning as I was taking photos I see that the punch has markings (bumps) - center top and center on both sides. You could use these to line up your paper to make your snips even!! See the arrows on the right hand image - they are pointing to the little markings on your punch that indicate the center of the punch!! That works too!!
Have you found ways of using your tools to do more than they were designed to?? Look forward to hearing from you!!
Therese
Posted by Therese at 9:00 am No comments:

I created some quick cards that would be easy to replicate for those who are wanting to give cards as gifts for teachers, etc!!
This is really quick!! You need twelve 1" punchies of decorative paper/cardstock and a vellum greeting! The vellum greeting has vellum adhesive - nice clean look. The vellum adhesive is made by Fiskars and is called "Vellum glue dot film". It is invisible so it was very hard to "see"where it was but I eventually got the hang of putting my little vellum greeting punchies on the proper side of the plastic sheet so the adhesive could be transferred to the vellum. It works well when you get it where you want it - my trouble was that I got it some places where I didn't want it - like my fingers!! I ended up with vellum punchies with adhesive on both sides and things stuck to my fingers!! The adhesive was easily removed by rubbing with an eraser so that was good!! It works pretty well on these small shapes - not sure how effective it would be on a large area.
Don't have vellum? Consider just leaving off one or two punchies and stamping a greeting instead. Embellish the card front with paper piercing or markers to add some interest. Without a greeting they make perfect note cards!!!
Consider getting some card gift packs ready over the summer when you have a bit more time!! Perfect as hostess gifts any time of the year!!
Therese
Posted by Therese at 8:42 am No comments: