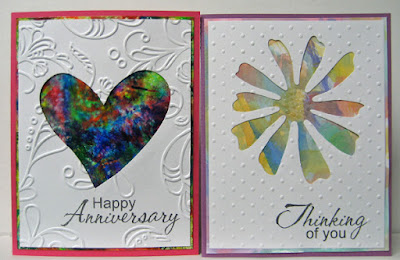 Have been pondering making cards with this technique for a while and after a discussion this weekend with my sister, I thought I would give it a try!!
I found some backgrounds in my stash - two alcohol inks on glossy and two all over watercolours.  I colour printed greetings that coordinated with the colours of my backgrounds onto white cardstock and trimmed them down to quarter sheets.  Next, I wanted to die cut holes in them which would allow my backgrounds to show through. 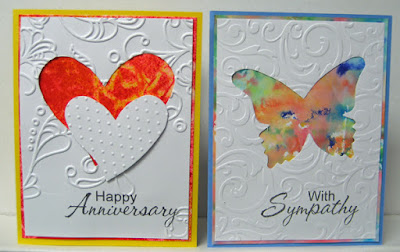 Cutting the holes is more difficult when the shapes are combined on one die which is the case with all of these images (SX and SU).   I cut the lower heart first and was unsuccessful at getting only the one die cut which I why I had to add another heart to it.  It is covering the extra cut.
For the others, I cut as much as I could using a small cutting pad (part of a broken cutting plate) and finished off the cut by hitting a cutting plate with a hammer to apply pressure only where I wanted to cut.  This worked reasonably well.
If the dies had been individual ones or framelits this would not have been an issue and the process would have been much neater and faster.  After cutting the openings I embossed the layers using several embossing folders and trimmed them down to fit over the backgrounds leaving a bit showing all the way around.  I used double sided tape to adhere them to the backgrounds and then glued these elements to coordinating card fronts.  I am pretty happy with the results though I will consider acquiring more individual dies for this technique to make it more time efficient.
A few more cards to add to my stash!
Therese
Posted by Therese at 11:30 am No comments: