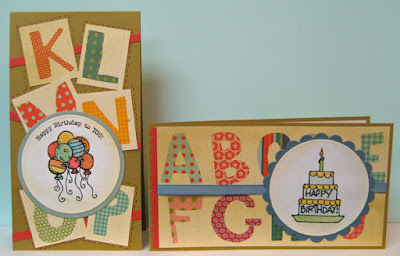 I promised a while back to make kids birthday cards for my daughter. These are the ones I made for her last time with balloon stickers.  This time I chose two digital images - a birthday cake with a greeting and a set of balloons to which I added a curved greeting using Corel Draw.  I got these two from Best Clipart .  I  sized them appropriately and laser printed them onto white cardstock and cut them out with a 2.5" Nestibilities Classic Circle die.  Next I dug into my decorative paper pile which may very well outlive me in order to get some cute designs for my cards!!  I started with the right hand card trimming the 12" x 12" sheet to trim off the first set of letters on the page.  I trimmed the strip between the letters and ended up with two strips a bit shorted than the 6 inches I needed so I tape them to each other and then added a blue gros grain ribbon to cover where they join.  To make up the bit of extra space I needed I added a red strip on the left hand side which I had trimmed with scallop decorative scissors and then paper pierced in each scallop with a push pin before I added this large element to a coordinating green card front.   I watercoloured my birthday cake image to coordinate with the card, layered it onto a coordinating blue scallop circle (Nestibilities) and adhered it to my card front over the ribbon.  I had trimmed off several letters and when I tried to use them on my next card they did not work as well as the first ones had so I eventually cut them all apart and glued them to my card front in a fun layout.  I added dark orange strip beneath them to add some texture and interest to the card.  I used a red marker and drew in faux stitching around all of the letter blocks which helped define them and make them into a unit for the background.  I watercoloured my balloon image to coordinate, layered it onto a blue circle (Nestibilities) before adhering it to the front of my card.
It has been fun to play with paper and make cards that I think my grand children will appreciate giving to their friends over the course of the next year or so!!

Therese
Posted by Therese at 5:08 pm No comments: