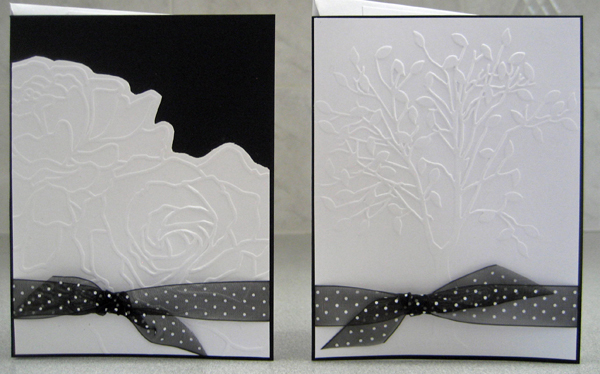 For our last card I made kits that came together fairly quickly.  Though these were quick to make the cards are simply elegant and can be used for a variety of occasions.  The one on the right uses a tree embossing folder (SX) with a quarter sheet of white cardstock which was trimmed after embossing to leave a small border all the way around.  The one on the left uses a floral embossing folder (SU - Manhattan Flower) which I trimmed down to the edge of the embossed flower which reveals more of the card front for a very different look.  I added organza ribbons that coordinated with the card fronts.  We adhered the ribbon to the back of the embossed layer and trimmed off the excess which we tied to the front using one knot to simulate a bow.  I ended up with two black and white ones.  These are always elegant made up in in dark regal colours like cranberry, navy, forest or spruce green, etc.  Again, without greetings these cards can be used for a variety of occasions from weddings to funerals!!              Therese
Posted by Therese at 5:24 pm No comments: 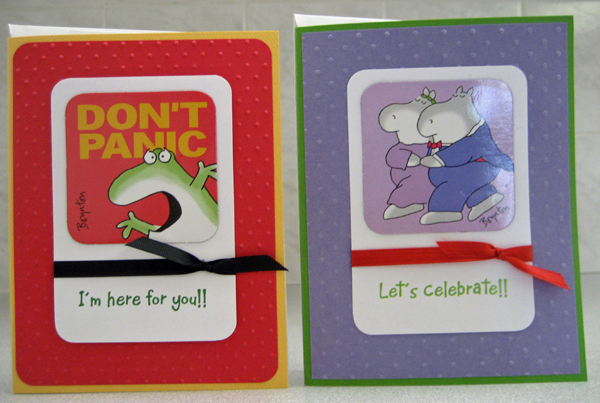 These cards feature some arty magnets which I found at a thrift store a while back.  There were nine of them so they suited this class perfectly!!!!  I invented some appropriate greetings for the magnets and printed them on white cardstock and them trimmed down.  We used a corner rounder on the corners of these layers to mimic the rounded corners on the magnets then added our magnets with a small piece of double sided tape.  It makes a fun card to have a little gift included as well.  Next we worked on our ribbon.  The ribbon was positioned between the magnet and greeting and attached to the back using double side tape and the excess was trimmed off and tied to the front with a single knot to simulate a bow.  We trimmed our ends neatly.  Next we embossed our large background layers before adhering them to the front of our coordinating cards.  I chose to corner punch this layer as well on the red card which worked very nicely.  I used Swiss Dots on the red card and the SU dots one on the purple card.  To finish our cards we simply attached our magnet layers to our card fronts using 3D foam tape.  What fun cards!!  With the arty magnets it was great to be able to add appropriate greetings which could be used for different situations which come up with friends and family.

Therese
Posted by Therese at 5:12 pm No comments: 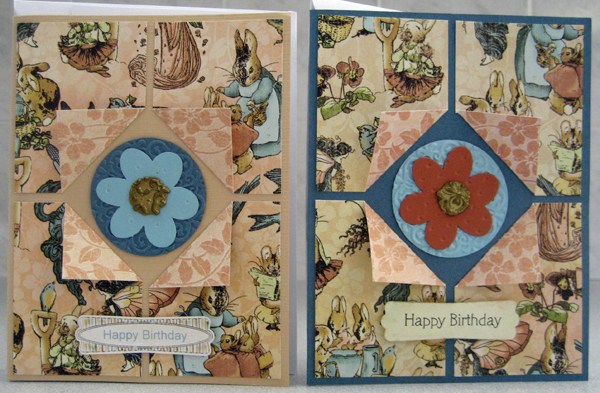 One of the girls who comes to my regular cardmaking class asked if I could put on a class for her daughter and some of her friends.  For sure!!!  I am always up to spend some creative time with like minded people.  They were over this week and here is the first card we made.
For these kits I used double sided scrapbook paper and cut pieces that measured 3 7/8" by 5 1/8". I then cut each of these into four - at 1 15/16 and then again 2 9/16" to get four equal sized rectangles.  Next I created a folding template so they could consistently score and fold the little flaps.  For this paper we had to be careful to score the right corner in order to keep the bunnies with their heads pointing up.  On some of the other papers it was less important and some mixed their papers so that two had one pattern and the other had the other pattern on the front.  Once all the rectangles were folded we glued the four to a coordinating card front.  For the embellishment in the center I punched coordinating 1 3/4" circles which we embossed with circle elements from embossing folders - clocks, gears and a medallion.  The other elements were also embossed - flowers or gears.  Next, we had fun and created these fun textured centers using hot glue and a texture mat.
We started with an eighth inch disk of gold hot glue which we placed on a scrap of paper and heated with a heat gun over a foil wrapped piece of cardboard until it had melted into a puddle.  We moved the paper/puddle to a sheet of paper and poured gold embossing powder over it then removed the extra.  The embossing powder sticks to the hot glue puddle and starts melting.  We put the puddle/paper back onto our foil surface and heated it through which melted all the embossing powder as well.  We gently laid a silicone texture mat which had been inked with gold pigment ink over the puddle and let it sit until the hot glue solidified.  Well, actually we put them the freezer for a minute or so because we were anxious to see what they turned out like!!!  If you try to remove the mat before the glue has set you have a mess of hot glue with stringy things - not good!!  We removed the mat to reveal our uniquely textured centers!!!!  We pulled off the paper from the back which left enough paper to allow us to glue our little gold embellishment to the middle of our flowers or gears.  That was how I made my samples but a wide variety of sketches played out as the girls did their own thing and rearranged their elements to follow their own inspiration.   After gluing the textured centers to my flowers I glued the flowers to the embossed circle to complete my 3D embellishments.  These were glued in the center opening created by the folded back flaps. I provided greetings but this sketch does not really require a greeting so it was up to them whether to adhere their greetings or not.  These are both greetings are both punched with the Modern Label punch (SU).  The one on the left is a combination of a digital oval image and a font greeting.  The one on the right is just a font greeting punched out.  I added a bit of colour to both of them so they would blend with their backgrounds nicely.   They were a creative bunch though several had not made cards before.           Therese
Posted by Therese at 5:00 pm No comments: