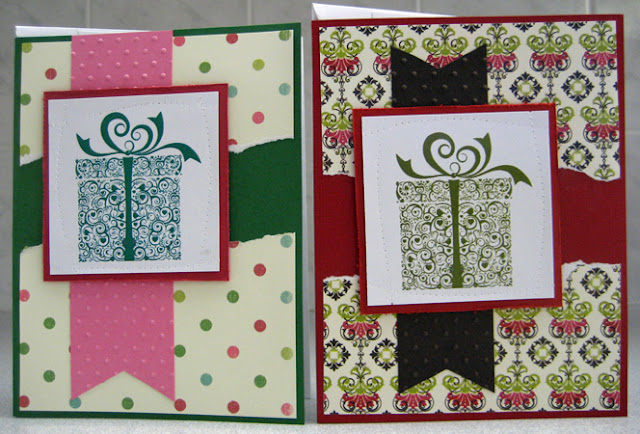 For these cards, we started with 4" square of decorative paper.  The left hand card features scrapbook paper and the one on the right is colour printed digital paper (SU).  Each one has been torn and adhered to a coordinating card front.  The gift image has been digitally manipulated to produce a variety of colours which coordinate with a wide variety of papers.  The gift images were trimmed to 2.75", textured with a tracing wheel and/or a distressing tool and then mounted to a square of coordinating cardstock.  Each kit had a strip of embossed cardstock which was trimmed and mounted over the gap in the decorative paper and then the gift image element was mounted over the strip using 3D foam tape.  Each kit included a single sheet panel insert which featured a Christmas greeting.  A few more examples below.

Posted by Therese at 5:16 pm No comments: 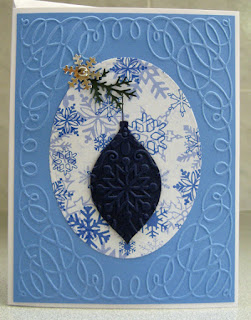 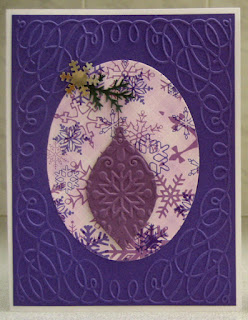 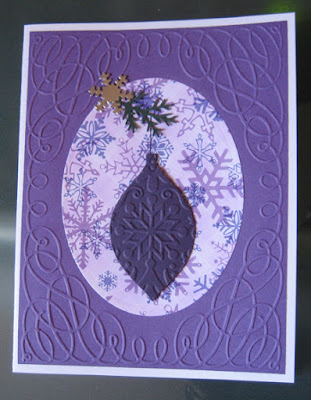 For this card, the embossed quarter sheets of coloured cardstock were embossed with the swirl frame embossing folder and then trimmed to include the whole embossed design.  These were coordinated with the decorative colour printed ovals which were die cut for a previous Christmas card class.  The ovals were glued inside the embossed design.  The little ornaments were cut from coordinating cardstock using a Nestibilities set and embossed using the center element from a Christmas tree embossing folder.  The ornament was adhered onto the oval using 3D foam tape.  After positioning the little branch punchie (MS) I drew a line from the ornament up a bit so they intersected with each other using a fine tip black marker.  Next, I glued the branch to the back of a small silver snowflake confetti and then added a small piece of 3D foam tape and adhered it on the edge of the oval in a way that it also intersected with the line I drew above the ornament.  In some cases, I also attached the snowflake with a silver brad which replaced the piece of 3D foam tape.  I adhered this large element to a white card front.  These were made up in a few colour combinations which coordinated with the decorative paper ovals.          Therese
Posted by Therese at 5:15 pm No comments: 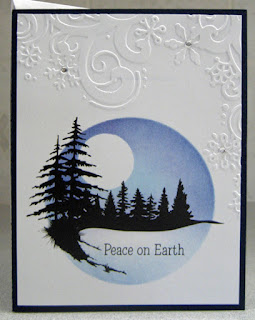 For these cards I printed a variety of silhouette digital images in black onto white cardstock and trimmed to 4" x 5.25"  This image is a compilation of several images from CLKER to which I added several wavy lines to create a bit of a horizon.  Once trimmed I emboss the images with several Christmas embossing folders just using the areas of the embossing folders that worked for each design.  Each person was supplied with a circle stencil which was created using a quarter sheet of transparency plastic from which a central circle had been cut using Nestibilities Classic Circles dies.  They secured their cardstock with some painters tape and then positioned the stencils over the area of the image they wanted to highlight and secured that with painters tape as well.  Next, they used a variety of little sponges to add colour to the open area of the stencil which created  a beautiful circle on the image.  We used 1" sitcky note circles to create white "moons" in our landscapes as well.  I used the edge of torn paper to create a bit of interest just above my horizon line which sort of mimics mountains and/or clouds and used several coordinating colours of ink to get a beautiful circle.  To finish off the cards we glued our layers to coordinating card fronts and embellished them with clear rhinestones.
Therese

Posted by Therese at 1:43 pm No comments: