Birthday card with an inked background, ribbon and a stamped focal element 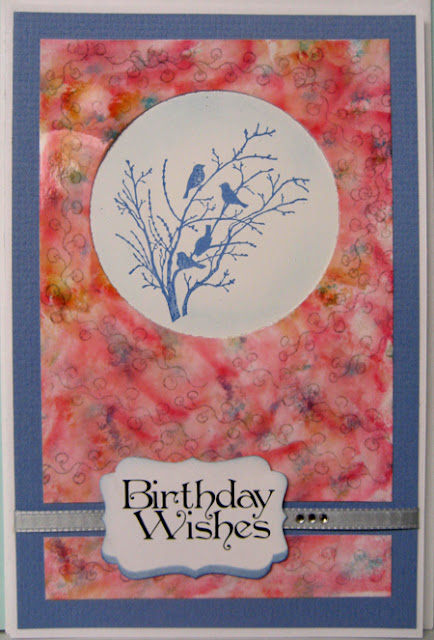 I made this card for my sister in law whose birthday has crept up on me so I am sending it off tomorrow with a little prayer that it will arrive in time!!!!!
I started with a large white envelope and made a white card to fit.  I found an inky background I created a while back using glossy photo paper and found some coordinating cardstock which I trimmed to have even borders on my white card.  The inky background was not going to be tall enough so I just trimmed it a piece off which will allow me to add something in the space.   I die cut an opening in the top portion, stamped a silhouette branch and birds image (SU) in blue ink on white and mounted it behind.  I added a bit of texture with a little squiggly stamp using light gray ink and then mounted my background to the blue layer.   I added a piece of silver satin ribbon in the space I created by cutting off a piece.  I could have trimmed the bottom section a bit wider but I think this works.  I added a punchie (SU) greeting which I had laser printed (Desert Diva) and to balance the words I sponged the bottom edge.  I masked it off with another punchie and applied blue ink until it was fairly dark.  Bonus - it makes the greeting dimensional as well.  I mounted it over the ribbon using 3D foam tape.  Feeling like it still needed a bit of something I added three little clear rhinestones on the ribbon and that worked really well.  Finished!!  In the mail tomorrow!!!            Therese
Posted by Therese at 9:59 pm No comments: