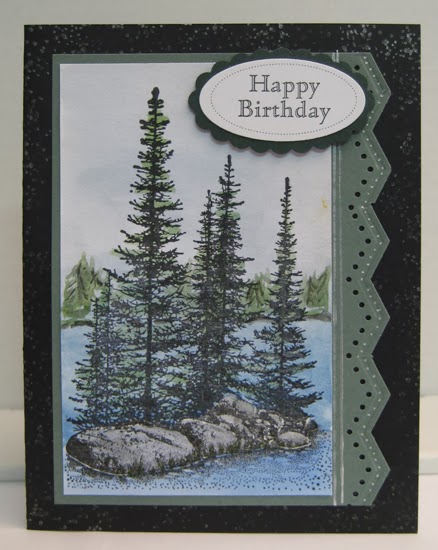 Today, I created this masculine birthday card using a landscape stamped image from my stash.  I watercoloured the water and the sky and then created a line of trees at the horizon.  I layered the image onto green cardstock, trimmed it leaving a large margin on the right which I cut using an angled border punch (MS).  I embellished the edge with a couple of lines and some dots using a silver gel pen.  I used silver ink to stipple (SU) the edges of my black card front and adhered my image leaving an even border.  I added a layered greeting which consists of a laser printed greeting punchie over a dark green scalloped oval (SU) on the top right section of my card.
Makes me think of the Thousand Islands - a place with the most beautiful natural scenery!!

Therese
Posted by Therese at 7:33 pm No comments: 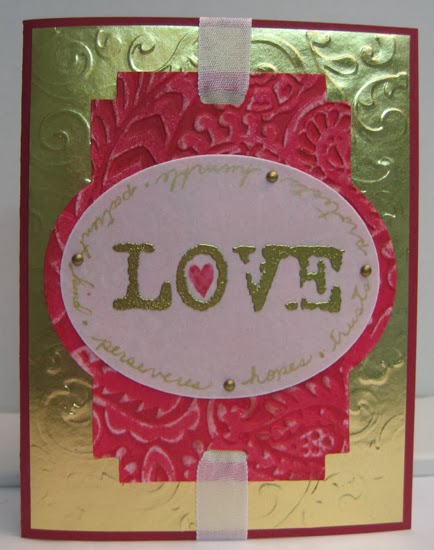 I started on my February cards today and made an anniversary card.  I combined its creation with a challenge on one of my groups to dress up a die cut so I started by die cutting a frame (SX) from duplex white core cardstock.  Having always wanted to try this embossing resist technique, I decided today was the day!!  So I embossed the die cut and then sanded it a bit to emphasize the pattern by revealing some of the white core.  I then applied clear Versamark ink to the surface and embossed it with clear embossing powder.  Afterwards, I sponged on some Brick Distress ink which did not give enough contrast so I followed it up with some dark red watercolour which I liked better.  After a bit of fitting I trimmed the half moon pieces off the two ends to remove some length.  For the focal element I die cut a vellum oval (NS), embossed it with "LOVE" in gold and added definitions to the edge in handwriting using a gold gel pen.  I attached it to the die cut using four gold mini brads.  I punched a slot (SU) on each end of the die cut and inserted some white vintage seam binding.  I embossed a trimmed quarter sheet of heavy weight gold gift wrap using the Musical Flourish (CB) embossing folder and glued it to the front of my red card front.  I adhered my die cut over that layer and glued the ends of my seam binding to the inside of the card front.  It needed a bit of something so I added a little heart to the inside of the O using a bit of watercolour!!
I expect this card would be quite suitable for a wedding or Valentine`s, as well.

Therese
Posted by Therese at 5:41 pm No comments: