Affirmation cards about the power of your thoughts, words and actions 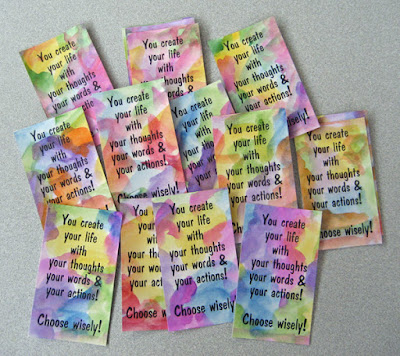 I made up these affirmation cards for a group that I hosted last week.  I laser printed the words onto white cardstock and then randomly applied watercolour until I was happy with how they looked.  Once they were dry, I cut them apart and pressed them under weight to help them lay flat.  They would make great book marks or can be tucked on a shelf or near the bathroom mirror as a daily reminder to choose wisely.
It behooves us to remember that we have creative power and that what we think, say and do affects our experiences and the process of our lives.  Fear creates a much different life than does love.  We get to choose!!

Therese
Posted by Therese at 9:51 pm No comments: 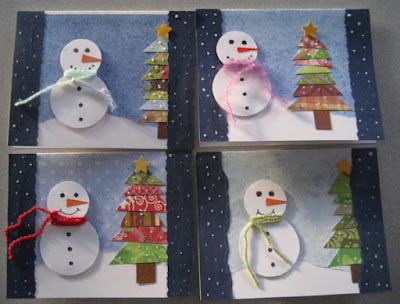 I was making up a few Christmas for my grand children and in the final few I decided to combine the wonky tree and the snowman I had used on previous versions of this card.
I used blue decorative paper for the background and ripped a strip off the bottom which formed a snowbank.  I added texture to the two navy strips on each one and mounted them on the left and right hand side.  For three of them I tucked the trees under the strip and later realized that I could just have placed the tree on the card and then mounted the navy strip which would have been easier!!  You can check my tutorial for the snowman here.   I added the snowmen to the cards using 3D foam tape and then added iridescent glitter glue to the trees and navy strips to add a bit of texture and glitter!!  I am sure the kids will enjoy them!!

Therese
Posted by Therese at 9:22 pm No comments: