Birthday card with a punchie greeting, decorative paper and some ribbon 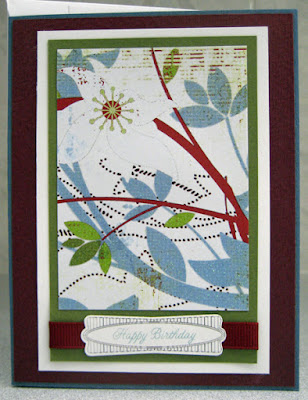 I made another card today for my stash.  I features a piece of decorative paper with a floral pattern.  I mounted it to a green layer, added a short piece of ribbon adhering the ends to the back and added a little laser printed greeting punchie (SU).  I mounted this large element to a white layer, then a maroon layer and finally to a coordinating blue card.  Not my usual sort of sketch and I don't usually manage to get this many layers in either!!  Stretching myself creatively!!          Therese
Posted by Therese at 8:48 pm No comments:

Fabric pouch made for dishes for one person 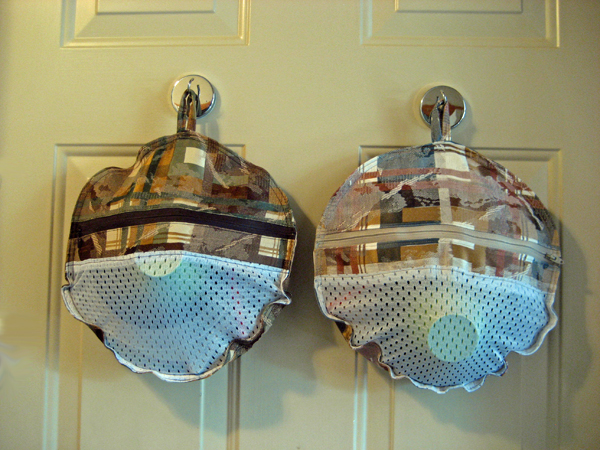 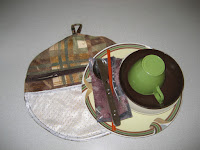 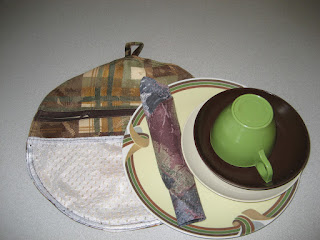 In anticipation of bringing our own dishes to our family reunion this year I worked on making carriers for them this weekend.  I had thought I would make them square but when I got started it seemed that round would work better so they are round.  I made one for me and one for DH.  I used polyester/cotton upholstery samples and included some mesh in order to allow the dishes to dry if they are stored away wet or damp.  I included a zipper just above the middle making sure it was going to be wide enough to insert my plate.  I cut the back 12.25" and then used the scrap to create the top of my front and inserted a zipper.  I thought the zipper in the mesh might not work quite as well.  I added the mesh and trimmed it to be the same as the back.  I used the small scraps to make a hanger and positioned it at the top and then with right side facing each other I stitched all the way around double stitching where the holder was.  I turned it inside out and ironed it flat ensuring that the seam created a nice edge.  I added two lines of stitching - one about 1/8" from the outside edge and one about 1/4" from the outside edge.  Worked out really well!!!!!! I stitched a napkin from fabric and added it to my carrier.  It works well to wrap the utensils in the napkin which prevents the tines of the fork from poking out of the mesh!!
All the girls at Guide camp have to bring dishes to camp which they use for all of their meals.  It produces so much less garbage and each girl is responsible for her dishes and for washing them after every meal.  It creates an awareness of environmental responsibility as well a personal responsibility for their own "stuff".  We are encouraging everyone coming to the reunion to bring their own dishes in order to drastically reduce the amount of garbage we will be producing.     Therese

Posted by Therese at 2:01 pm No comments:

I made up this beach cover up for my grand daughter who is going to a Guide camp out east this summer.  Her Mom thought a beach cover up would be a good idea, bought several coordinating t-shirts at the thrift store and provided the instruction in the way of a library book with ideas for teen sewing projects.  I was more than willing to do the sewing.  I combined two t-shirts to make the cover up using a more lightweight pink one I had on hand from a garage sale for the bottom.  It was more comparable in weight and fabric which will mean that they should dry at about the same rate when it gets wet.
I cut the sleeves off the navy one and simply turned over the edge and used pink thread and a triple zig zag stitch to finish it off.  I left the navy one as it was and cut the pink one long enough to make the cover up just above the knee on me so it will be a little shorter on my grand daughter as she is grown a lot this year.  Once I cut the pink t shirt I ran a basting stitch along the cut edge, gathered it just enough to fit in the bottom of the navy one and folded the seam allowance over on the stitching line.  I pinned the fold to the inside of the navy one to line up with the stitching on the hem.  I used the same triple zigzag stitch using pink thread to sew the two together which put the decorative stitch just nicely within the two lines of stitching on the hem of the navy shirt.  It helps to make it look like it was originally all one piece and coordinates with the stitching on the arm holes.  I cut a strip off of the remaining piece of the pink shirt to make a tie knotting each end and fringing the ends.  I dug through my stash and found a piece of trim that coordinated so I made two loops and hand stitched them to the cover up on either side of the middle just a bit lower than the natural waist line so that there would be a bit of extra on the top when it gathered.  I embellished the loops with pink buttons.  These will be easy to move should they not be in the right place as I did not have my grand daughter around to try it on when I was sewing!!  I am sure it will do the trick for her trip and will be a good thing to have for the summer when they got to the beach.        Therese
Posted by Therese at 1:52 pm No comments: