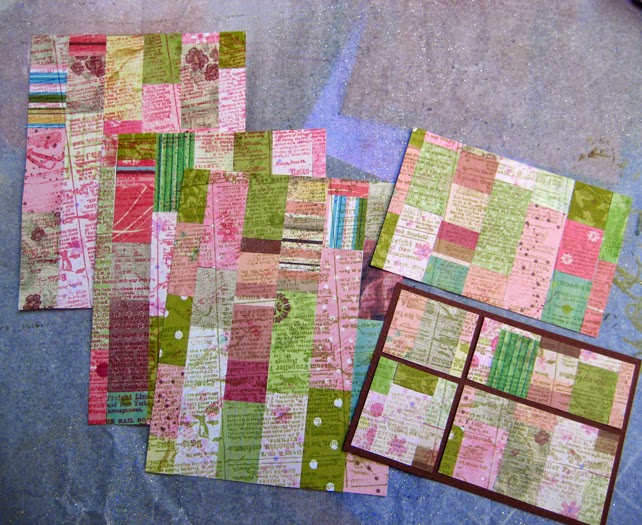 I am always looking for ways to use my scraps so I dug out these 3/4" wide strips from my stash and decided to find a way to use them up.  I cut these for making a patchwork layout  for a journal class a few years ago, then for a log cabin patchwork for a cardmaking class and used a few more for paper beads for another class.  They are sorted by colour so I picked green and pink  - my favorite combination - and glued them end to end then side by side on an 8.5" x 11 scrap of used printer paper which was sitting by the printer.  Once dry, I cut it into quarters and stamped two of them with pink ink and the other two with green ink using a newspaper column background stamp (IO).  I cut one of the green quarters into two and started cardmaking!! 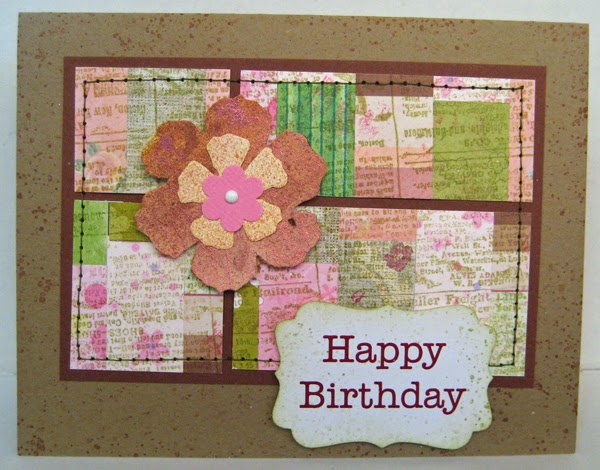 Here is the first card I made.  I cut the 2.75" x 4.25" into four, interchanged the pieces and glued them to a piece of brown cardstock then trimmed it to leave an even border all the way around.  I attached it to my stippled card front by stitching all the way around with my sewing machine using brown thread.  I added a layered flower using a small white brad.  I added a punched (SU) laser printed greeting which I had sponged and stippled with green ink. 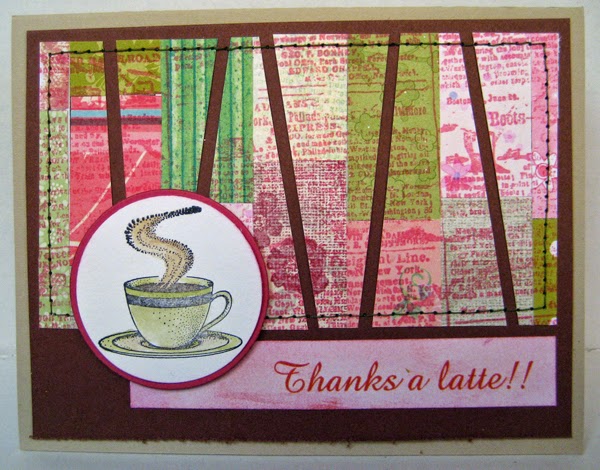 For this card I used one of the collages I had stamped with pink.  I cut the quarter into two and used one of the halves for this card.  I cut the 2.75" x 4.25" piece randomly into six pieces, glued them to brown cardstock and then machine stitched all the way around using brown thread. I trimmed the brown cardstock to leave a large border on the bottom to accommodate my laser printed greeting and an even border on the three other edges.  I added my sponged greeting and a coffee cup image which I had punched with a 1.75" circle punch (SU) and layered with pink before I glued the whole piece to a kraft card front.
Two cards ready to go for the new year!!  That leaves me three full quarter sheets of this collage to play with later on and the possibility of creating another six cards with this collage which I created out of scraps!!  I like the artsy and unique look I get when I create these collages for my cards.

Therese
Posted by Therese at 12:36 pm No comments: