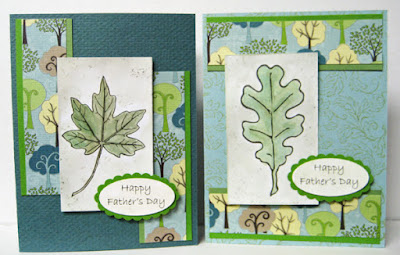 I needed four Father's Day cards so I decided to create them One Sheet Wonder style!!  I found this tree decorative paper which came out of the same pad as these cards and these cards which I thought would work quite well.  I cut the sheet in half and trimmed one 6" x 6" sheet from the one half and used it to make my four cards.  I trimmed the 6" x 6" into four pieces of 2" x 4" - the cutting template is below.   In the end I decided to trim my 2" x 4" pieces in two (1' x 4") and backed 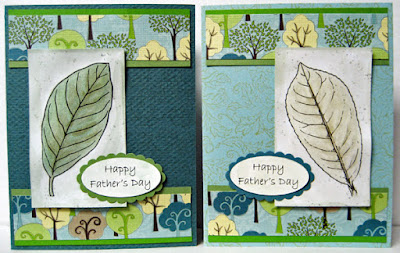 them with tiny strips of two different greens - one on each long edge. I cut two different sheets of blue cardstock to create my four card fronts and stamped them all with a leafy background (ANM) in light green.  I downloaded four leaves from CLKER, cleaned them up in Photo Elements and printed them onto white cardstock.  After trimming them to 2" x 3.5" I watercoloured them to coordinate with my decorative paper.  I found four laser printed Father's Day greetings in my stash, punched them with out my oval punch (SU) and then layered them onto coordinating scallop oval punchies (SU). To assemble my cards I started by gluing down my layered decorative paper rectangles onto my stamped card fronts.  Because the paper is directional I had one set that went vertical instead of horizontal which changed up the sketch a bit and added variety to my cards. Next, I added my watercoloured images using 3D foam tape and then added the layered greetings using double sided tape.  Very happy with the variety of sketches I came up for the four cards I made.  After they were all assembled I thought they still needed "a bit of something" so I added a bit of stippling on the images.  That was better!!  So my cards are finished!  Some will be mailed off tomorrow and I will deliver the others in person on the weekend. 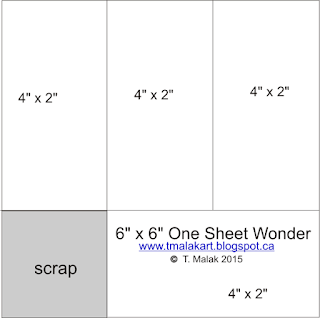 Cut decorative paper according to the diagram.
Cut large sheets of cardstock in half and fold to make card four fronts.  Prepare images as you wish.  Layer greetings.  Assemble cards as described or as you wish.

Posted by Therese at 7:40 pm No comments: 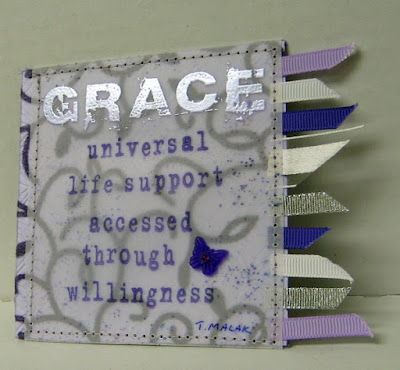 In the last few days I have managed to finish my 4" x 4" chunky book page with the themes of purple and grace.    I statred with an embossed white cardstock square which I overlaid with the purple gauzy fabric with swirls.  I used double sided tape on the back to keep it in place. I back this with a 4" square of purple cardstock.  I stamped a vellum overlay using two different rubber stamp alphabets.  Grace was stamped in purple and embossed with Pastel embossing powder.  It is a bit of a grungy font but the embossing powder softened its look. I used my Making Memories magnetic alphabet stamps to finish the quote and added a bit of stippling in purple ink.  I trimmed the sides of the vellum to just cover the page and the two ends so I could fold them over the top and bottom.  I added some short ribbon flags in several colours between the vellum and the page on the right hand side and then stitched them all into place using purple thread in my sewing machine.  I went very slowly as the sandwich was quite thick.  I added a little plastic butterfly charm using a large glue dot and added my credits to the back.  Love the look of grace!!
It is off to my partner in tomorrow's mail.

Therese
Posted by Therese at 7:01 pm No comments: 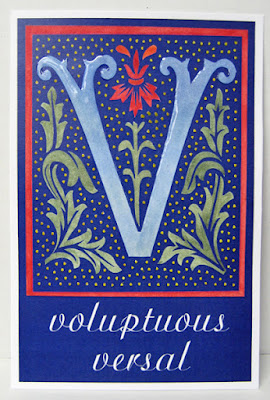 On one of my groups we have been exchanging postcards to spell our name, so this month's letter is V.  I found this versal letter V in a font and enlarged it enough to fit on a 4" x 6" digital rectangle of colour.  I added the words at the bottom and then colour printed it on white cardstock.  I then watercoloured all the elements - the dots - yellow, the leaves -  green, the flowers  - red and orange and the letter V  - a light blue.  Once everything was dry I added clear dimensional paint to the V. I added a postcard backer and it is ready to go to my partner!!
I like working digitally every once in a while.  It always changes up the look of my creations!!

Therese
Posted by Therese at 6:47 pm No comments: