A watercoloured leaf over a fun background created with squares 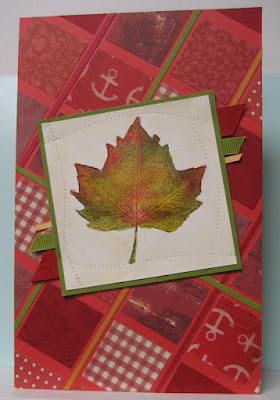 Another large card for my sister!!  I used the same leaf image (from a swap way back) which I used on my last card.  I created this fun background using 1.5" squares of decorative paper glued to a large red card. I cut several to get started and then cut a few more.  I laid my triangle square on my card edge and glued down the first full row using a scrap of cardstock as a spacer in between them.  Next, I laid the spacer below the row, added another square and then placed my square on the bottom and set another row in place.   I continued in this fashion until I had placed all the squares I could.  All the squares that were outside of this area I place by eye using my little spacer to align them and trimming those who overlapped the edge of the card.  In some cases I was able to reuse the scraps I cut off to fill in some of the areas that needed partial squares.  Really like the look of it!!  I added some tiny strips of green, red and yellow cardstock in between in a few areas to help develop a colour scheme for my leaf.  I watercoloured my leaf, glued it to a square of green cardstock and ran my tracing wheel over the four sides.  I added short ribbon flags to each side - top on the right, bottom on the left then adhered this focal element to my card front using 3D foam tape.  This was a fun card and I will be making some of these fun square backgrounds again!!
Therese
Posted by Therese at 7:46 am No comments: