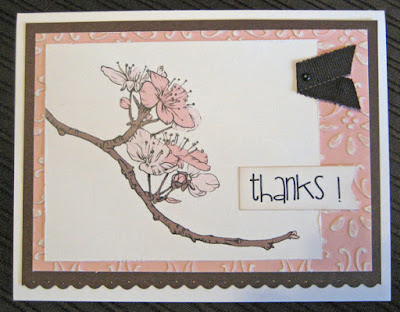 This card features a digital image from KISSPNG, a new digital image site I discovered in the last few days!!  I colour printed the image, trimmed it to size and distressed the edges.  I mounted it to an embossed layer in the same peachy colour as the flowers.  This was white core cardstock so I sanded it a bit to highlight the embossing which is a nice floral design (SU).  I adhered the image to the embossed layer, added a small piece of brown folded  ribbon using a tiny black brad and glued this layer to a dark brown one which I had trimmed with scallop decorative scissors.  I pierced each scallop with a push pin - an easy way to add texture to this card.  I mounted this large layer to a white card front and added a small laser printed greeting (Desert Diva) which I had flagged and sponged in brown to finish off my card.  Love how everything works so well together!!             Therese
Posted by Therese at 5:36 pm No comments: 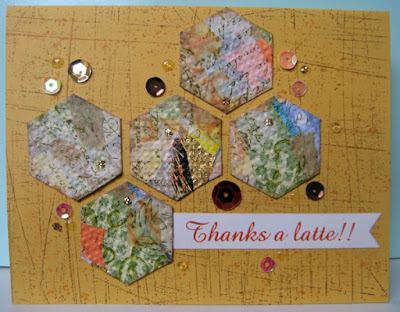 I made this card for a lady who has not been able to participate in our card exchange this time around but as a enthusiastic cardmaker she certainly would appreciate a card!!
I have been gifted some new craft supplies by my sister though we might yet work out a trade.  One of the items I received is a Hexagon die by Sizzix!!  The die cuts six at a time and they are the perfect size for cards!!  There has been a serendipity challenge on Splitcoast Stampers and I have been inspired by what others have done so I dug out my little bag of serendipity papers - I have made some ahead when I had the time and it has come in handy.  I chose several pieces that coordinating somewhat and cut as many little hexagons as I could out of the pieces.  Next I decided on a five hexagon layout - there are a lot of options - and chose the five from my little collection that would work best together.  I chose a yellow card front and stamped it with the Worn (SU) background stamp using brown ink.  I added some stippling with my little stamp (SU) and a warmer brown ink.  Next, I sponged the edges of my hexagons with brown ink and adhered them into place using a combination of double sided tape and white glue leaving the bottom one until last so I could glue down my greeting before put it into place.  The greeting is colour printed, trimmed and flagged and sponged a bit.  I had decided to embellish with sequins so I dug out the bag and auditioned quite a few until I had what I thought worked best.  I used glue dots to adhere them into place.  Still thinking it needed a bit of something I added some drops of clear dimensional paint on the card and drops of gold glitter on the hexagons.  With those in place it was just a matter of waiting until they were dry and the card will be on its way to her.   Therese
Posted by Therese at 1:42 pm No comments: