Cards featuring crosses with bright backgrounds, a bit of colour and some ribbon 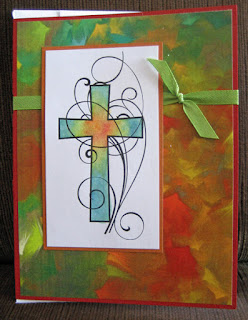 I made a few cards with crosses as I often get requests for them for certain occasions where they are most appropriate.  The cross images were downloaded off the internet and printed on white cardstock before being trimmed to size.
For the first card, I chose a colour printed background from my stash and then watercoloured the image to coordinate.  I layered the background paper onto a red card and added a green ribbon using a slot punch to create a little opening on the spine for the it.  I mounted the image onto rust cardstock and then mounted it over the ribbon using 3D foam tape.  To finish it off, I simply tied a short piece of the same ribbon to the one on the front using a single knot to simulate a bow.
For the second card, I chose a hand decorated background (white cardstock, watercolour and plastic wrap) and watercoloured the cross image to coordinate.  I die cut the cross using oval Nestibilities and then added a black layer and another white layer with I sponged with red ink until it contrasted nicely.  I layered the background paper onto a yellow card front and mounted the large oval element over it using double sided tape.
For my third card, I chose a navy card and layered on this blue colour printed background paper from my stash.  I trimmed into two pieces which left a gap of navy.  I sponged a bit of colour onto the cross image, ran my tracing wheel over all four edges in a wavy pattern and then mounted it to rust cardstock.  I added double sided tape to the back of the top right corner and added three little strips of ribbon before mounting this large element to my card front with 3D foam tape.    Therese 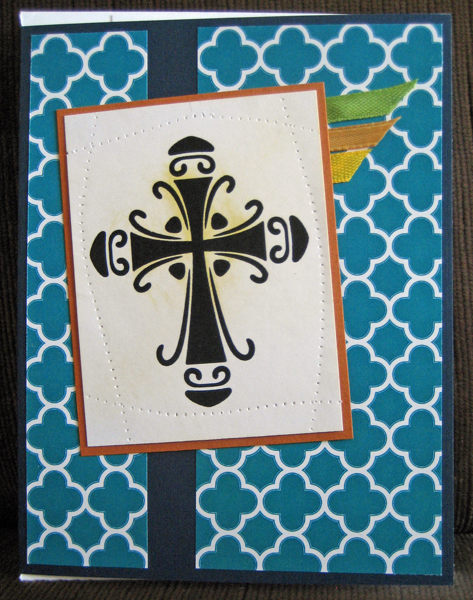