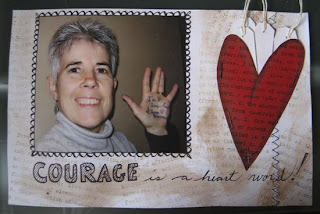 Today, I worked on this journal page for my ecourse - Brene Brown and The Gifts of Imperfection.   Our mantra is "I'm imperfect and I am enough".  Today I wrote this quote on my hand with a sharpie, embellished it with hearts and then took a picture of myself - a selfie.  How fun is that!!  I had to give myself permission because as kids we were taught that writing on our hands (or anywhere else) was unacceptable.  I have had henna tatooes done before but I think that Sharpies make wonderful tatooes that are permanent enough and so much less expensive than a real ones and give you the opportunity to change it up whenever you feel the need!!
I printed my photo onto my half sheet (8.5``x 5.5``) of white cardstock, added some doodling around the photo with my fine tip Sharpie, colour washed the rest with burnt umber and then stamped my `LOVE`` definition (SU) all over in a darker ink.  I hand lettered the COURAGE quote and added a heart embellishment. To create my embellishment I drew the heart on red cardstock, cut it out, added definition with a bit of watercolur and then stamped the same `LOVE`` stamp on it!!  I stapled it to my page and added some cute little tags that hold the names of the people whose opinions I value and have earned the right to hear my story.  I did some personal journaling on the back of the page.
I don`t have many pictures of myself!!  It is interesting to see what I really look like!  I am loving my new haircut!! 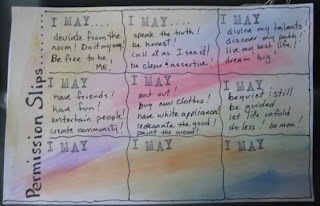 Here is my next journal page - permission slips!! Brene emphasized that we sometimes need to give ourselves permission to do those things that we fear or have come to accept as being unacceptable!!  I have a long list on the front and the back of this page!!
I hand lettered the words "Permission Slips" and added a grid to write in.  I stamped "I may" in each rectangle and then just added with my fine tip Sharpie the things I wanted to give myself permission to think, say and do!!  I added a second page so I have all sorts of room to add more as I become aware of them!!  I added the watercolour wash afterwards with a wide brush - one that had never seen water or colour before this day!!

Posted by Therese at 5:24 pm No comments: 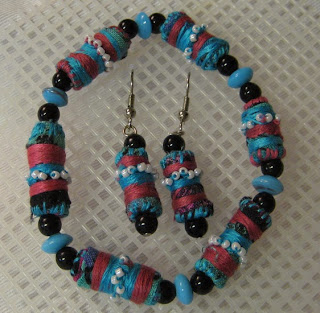 So, here is my fabric bead bracelet!!and earrings!!  I found some turquoise and black beads in my stash which worked well with my fabric beads so I strung them onto stretchy cord to make my bracelet.  In the end, it was too long so I took it apart and removed two of the fabric beads which worked much better. The two beads just sitting there seemed to be pleading to be used so I decided to create a pair of earrings to match!!  Worked out so well!!  I love the contrast of the matte fabric beads and the shine of the other beads.
I did find that the beads became a little fuzzy at the ends as they were unstrung and restrung so sewing the beginning of the beads would be a good idea in that it would keep the channel more integral. I will consider if there is a way of adding a sturdier material at the core of the bead to reduce the wear and tear of stringing and restringing the beads.
I have managed to clean up the supplies that I had laid ALL OVER in my quest to find everything I needed to make up this project - beads, stretchy cord, findings, etc.

Therese
Posted by Therese at 2:14 pm No comments: 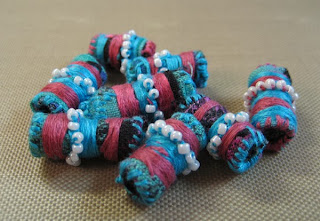 I have been investigating making fabric beads in order to create bracelets for a swap that I have signed up for.  These were really fun to make!! There are a lot of different ideas out there for making fabric beads so I ended up sort of combining several to get what I was looking for.  I used a strip of fabric about 5" long x 1" wide.  I folded in the edges and added a short piece of double sided tape at my starting end so that the bead would hold together when I started rolling it on the skewer.  I rolled up the fabric strip as neatly as I could and at the end folded over the short end and stitched it up to create the bead.  To keep them from falling apart you really need to add some sort of stitching so, while I was at it I decided to use my floss as decoration as well. I wrapped two different colours of floss around the bead all the while adding stitches as I went.  I added stitching to both ends as well to keep those nice and neat.  Once done, they looked a little plain so I decided to stitch on a row of white seed beads as well.  I really like how they worked out.
On hind sight, I chose floss that coordinated with my fabric but I see that the fabric does not show very much now that they are all done.  Using double sided tape on the inside of the bead made stitching it difficult by gumming up the needle.  I may have to stitch the beginning end similarly to how I stitched the finishing end to create a base for the bead and maybe some other kind of glue that would be better for stitching.   I will have to experiment.
So in the end, though I love the look of the beads and I am sure they will make a beautiful bracelet the time commitment to making enough beads to make a bracelet for each of my swap partners is more time than I have!!  Darn!!  So I will be looking for a different project for that swap.  In the mean time, I have decided to make a bracelet for my self with my beads!!

Posted by Therese at 2:00 pm No comments: 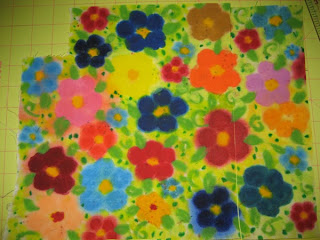 On one of my groups we have been challenged to use wax so I have been perusing the internet for ideas to try out!!  I discovered a site that showed how to use fabric instead of cardstock as the base for a wax painting!!  Too easy!!  I looked through my stash for a piece of white fabric and got busy!  I laid foil over my griddle and turned it on. I played with the temperature a bit and found that 200F or so worked just fine to melt the wax into the fabric.  So I just played for while and doodled some flowers onto my fabric. It takes no time for the wax to harden once you remove it from the heat and it stiffens the fabric nicely.  After a few calculations, I decided to cut my piece into 3.5" squares to make a few stitched cards using my pieces as the main element!!  I try to remember to take a photo of my art (for use digitally later) before I cut it all up and you can see from the photo that I was already into the process when I remembered to take a photo.  I will be able to "heal" that cut with the aid of Photoshop Elements and a bit of time.
My piece yielded nine squares so I will post my cards once I have a few made.  The site I mentioned above described a way to create batik fabric which was really cool.  I did not have dye but overnight I got thinking that I probably can use something else - acrylic paint or ink - instead. I may try to batik a couple of my squares.

Therese
Posted by Therese at 1:31 pm No comments: