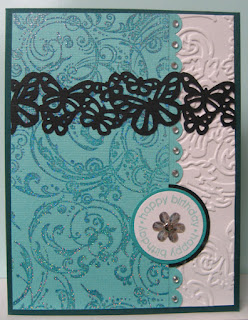 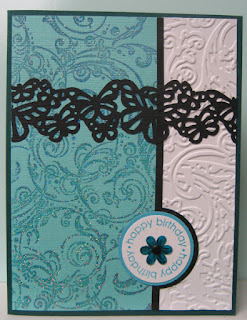 I found these two scraps together - the turquoise stamped and glitter embossed background and the border punched butterflies!!  A friend of mine punched it for me on one of our play dates a few years ago.  So I created a couple of cards!!!  I started with two deep green card fronts and layered on the embossed pieces on the right hand side.  Added the turquoise pieces along with a scalloped turquoise border in behind on the left hand one and a black strip over the edge on the right hand one.  I found several black circles in my stash which layered very nicely with my round greetings (SU) so I slipped them under the layer before gluing everything into place.  I added sequin flowers to my stamped greetings with tiny brads and then glued them over the black layer which highlights it just enough.  I glued the butterfly border above the greeting.  I added clear rhinestones to the scallops of the border to finish off the left hand card.  Two for my stash!!

Posted by Therese at 9:09 pm No comments: 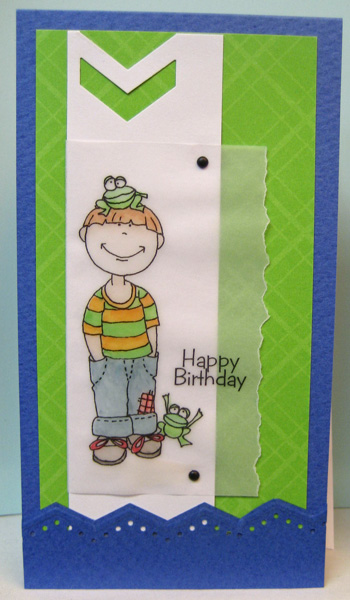 The final card for my set of sixteen cards!!  You can check out this post to get the details for why and how I created this large set of cards.
For this card I started with a bright blue card front and added the green decorative paper before adhering the bottom border that was punched with a Martha Stewart border punch.  I wanted to back the image with white because a green face is simply no fun.  So I trimmed a strip of white cardstock and punched the top with one chevron (SU).  I tested my image to see if it would fit and folded the left hand edge back a quarter inch to create a flap I could use to attach it to the back of the white strip. I watercoloured the image on the back being very careful not to use too much water because vellum has an aversion to it.  I was not as success as I have been in the past but that is sometimes the way it goes.  After my image was dry I attached it to the white strip using double sided tape on the flap on the left hand side.  I added a bit of glue stick behind the greeting but that was not enough to keep it down because of the buckling from my colouring so I added two little black brads to help out.  That worked quite well.  I tucked the white strip behind the border and trimmed it at the top of the green layer before gluing it into place. The image is from Dearie Dolls.  Lots of free digital images there!!      Therese
Posted by Therese at 8:16 pm No comments: