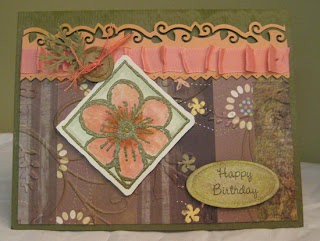 A card for a special person!  She loves autumn colours so I incorporated them as much as I could in her card.  I started with strips of brown patterned paper which I glued to a quarter sheet of white bond.  I trimmed it to fit on my card front, embossed it and added a bordered punched layer in a peachy colour to which I had added some peach seam binding by gluing it down all ruffly like over a piece of double sided tape!  Love the way it worked out.  I trimmed the lower edge using pinking shears - really old ones that no longer cut fabric - and then pierced each little triangle.  I watercoloured the gold embossed flower image and the greeting to coordinate.  To add a nice little accent and some texture I added a die cut button tied with embroidery thread over a couple of leafy green punchies (MS).  I did use the back side of the punched border to stencil the top of the card - just a little more texture for good measure!!
I will be seeing her soon! Looking forward to giving her this wonderful card!

Therese
Posted by Therese at 8:30 am No comments: