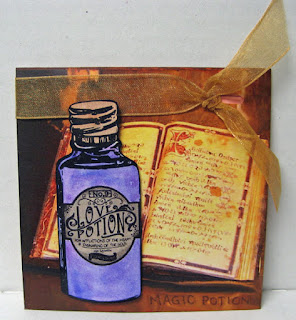 On one of my groups I joined a 4" x 4" chunky book swap with the theme of magic and the colour orange!!  I did a bit of brainstorming, sketched a layout and went looking for what I would need to create it!!  I found the book of spells on line on a geocaching site.  It was exactly what I was looking for - a beautifully illustrated book with a orange undertone.  I found the bottle on CLKER and added the label which I also found somewhere on line. Perfect!!  I imported the book in Corel Draw after I had made a few modification in PSElements to give it more height.  I imported the bottle as well after I had added the label in PSElements.  While looking for elements I had found an illustration of a little magician spewing magic so I decided I wanted something similar on the back of my page.  I downloaded this little guy (b&w) from CLKER and modified it in PSElements changing the eyes, hair, mouth, position of the arm and added a wand. 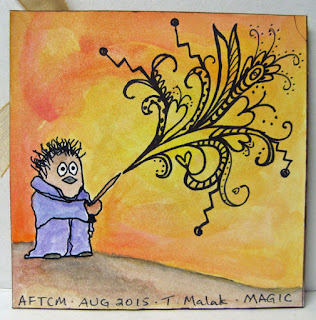 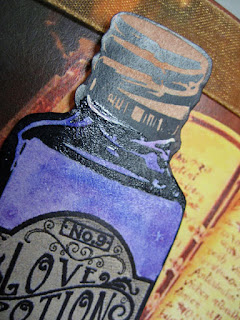 I positioned everything in Corel Draw and then laser printed it on white cardstock.  I trimmed it to be 4" x 8" and folded it in half.  I trimmed my bottle close and then ran a black sharpie around the edge to remove the white shadow.  I watercoloured the bottle and then applied glossy varnish to give it it a shiny finish.  I rounded the edges a bit and mounted it to the front of my 4x4 using 3D foam tape.  I felt like the page needed a bit more texture so I added an orange organza ribbon to the top.  That was better!!  I added some hand lettering and it was done!  On the back, I watercoloured the whole thing - the background in yellow and orange, the hill in browns and the wizard in purple.  He is a bit strange looking but I like him.  I have very little experience in digital drawing.  Once it was dry, I sprayed it with hair spray to seal the surface so I could add my magical zentangle.  I used a fine tip sharpie for the zentangle and just kept adding until I thought it was finished.  There are a few hearts in there because it is Love Potion after all!!!  Super happy with the result of my experimenting!!!
This little chunky book page will be off to my partner next week!!!