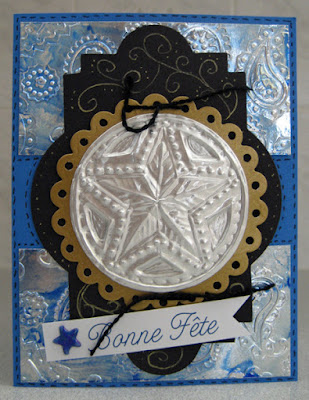 Another star card for my oldest grandson!!  I started by creating the embossed star. I cut a piece of foil packaging in a circle shape, embossed a star and then added more texture and details.  I will be posting a tutorial soon.  Once it was finished I used 3D foam tape to adhere it to a gold scalloped circle which I had die cut with my Nestibilities. I also punched a hole in each scallop.  I added a safety pin to a white cardstock circle and glued it to the back so he can remove it and wear it like a badge!! I die cut the label (SX) out of black cardstock, tied the badge to it with black fiber and then embellished around it using a gold gel pen. I created the background using embossed metal foil tape which I had coloured with transparent acrylic paint for a project a long time ago.  I trimmed and glued two pieces - one to the top and one to the bottom of a blue card and glued the focal element over them.  I added the trimmed laser printed greeting over the bottom edge of this element using a star brad which I coloured with Sharpie marker to coordinate with the card.  I glued the flagged end down with double sided tape.  Once I was done I still thought it needed a bit of something so I added black faux stitching around the outside edges and in the spaces on the outside of the middle of the label with a fine tip Sharpie marker.  That was better!!

Birds and flowers for this fun card 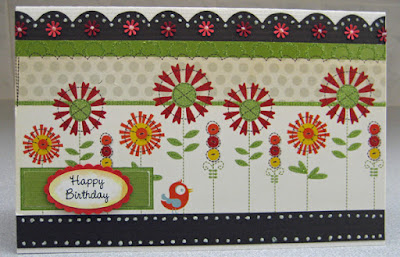 This large card was fun to make.  It actually uses the cover from the pad of paper!!  I layered a greeting in the glittery green frame where the name of the paper "Songbirds" was printed.  I added a green layer that filled the area and then added a layered oval greeting that was embellished with watercolour and mounted onto a red scalloped oval (SU).  I die cut the scalloped border for the top(SU), butted it to the trimmed decorative border and taped them together with regular tape.  I cut a strip just the size I needed for the bottom and taped them together.  I glued this large element to a white card front.  To continue the glitter theme of the paper I added dots of iridescent glitter glue to the scallops and two rows along the bottom.  It still needed a bit of something to I dug out some red daisy flowers and glued them into the scallops and then added a dot of glitter glue to their centers. That was better!!  Love this paper!!!!

Therese
Posted by Therese at 7:36 am No comments: