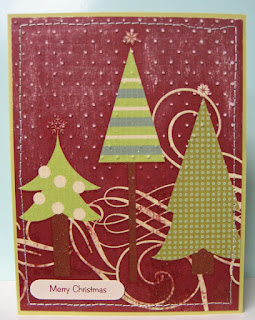 While I was making these cards  I found two pieces that featured these cool trees in my Christmas designer paper scraps which I had trimmed off of a page of scrapping booking paper while I was working on these cards.  Once trimmed they were perfect for putting on A2 sized cards. The sky part was bothering me a bit - it was so plain and even in colour so I decided to change it up a bit.  First, I sanded the area which was good but did not give me quite the effect I was looking for so I used my Swiss Dot embossing folder and a small hammer and embossed the area around the trees then sanded the embossing.  That was more what I was looking for so on the second one I did not bother to sand until after I had embossed the sky area!!  I stitched the layer to a green card front using my sewing machine and ivory thread,  then added a little laser printed greeting punchie using double sided tape. Done!  These were pretty quick and I really like the texture that the embossing and sanding added!!  Adding these two to my stash of 8 making it 10!!             Therese

Posted by Therese at 7:51 pm No comments: