Sympathy card with a butterfly 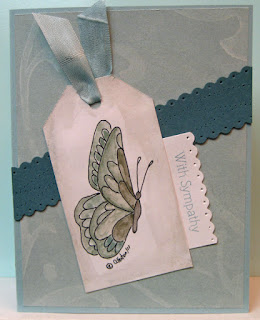 I am in need of sympathy cards this week and so made up a few so I will be ready for next time.
I made this one up from a kit from this class.   Sure is nice to have kits to put together when you are short on time!!
I started with a green blue card and added a soft background paper with lighter coloured swirls which was cut just a bit smaller which leaves an even border all the way around.  I trimmed a strip of darker blue green cardstock with scalloped decorative scissors and added some wavy lines with a pattern tracing wheel which added some texture and interest.  I pierced each scallop with a push pin as well.  I mounted it diagonally on my card and trimmed the pieces that overlapped on each side.  I watercoloured the butterfly tag (Angie Antics) with shimmery paint and added a bit of colour to the edges as well.  I used double sided tape to secure the seam binding to the tag and trimmed the ends diagonally as well.  I added the greeting to the side of the tag, trimmed it with the scallop scissors and pierced each scallop as well.  I used double sided tape to adhere the tag to my card front.    Therese
Posted by Therese at 3:44 pm No comments: