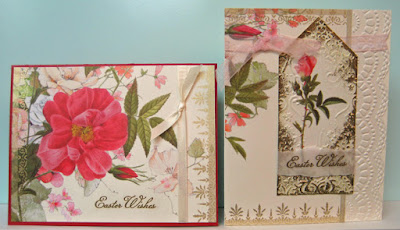 Easter cards!! It will be here before we know it!!
I have chosen to repurpose some commercial cards that were donated to me to create some new ones.
I managed to make two cards from one large beautiful card!!  I trimmed out the large red camellia to begin with.  The layer was just a bit too wide so I trimmed out about 3/16" and taped the pieces back together on the back so that I would not lose the gold decorative edges.  I added an ivory ribbon where they join and glued the whole layer to a red card front.  I stamped the little Easter greeting (SU) in the empty space between the flowers in gold pigment ink and embossed it in gold embossing powder.  Worked perfectly with this beautiful image and the gold borders.
For the next card I used the cut off from the first card that featured a small spray of flowers with gold borders which worked here because I used the whole piece - 5.5" tall.  It was not wide enough so I took a strip of the shimmery card, die cut the scalloped edge with a SU Thinlit then embossed it with the coordinating lacy embossing folder. Perfect!!  I sponged the front edge with gold pigment ink to coordinate with the gold edging and used double sided tape to adhere them together where they overlapped.  I cut out the little rose from the inside, trimmed it into a tag, manually embossed the edges and sponged all the edges with a bit of pink and green.  Next, I applied some gold pigment ink then some gold embossing powder to highlight the dry embossing.  I added a little gold embossed Easter greeting (SU) stamped on vellum.  I tore the edges and folded the ends to the back and secured with regular tape.  Next, I added a pink organza ribbon to my layer and threaded on the tag before securing the ends to the back with double sided tape.  Finally, I glued this large layer to the front of an ivory card.  The tag hides the printing that was on the front of the original card. 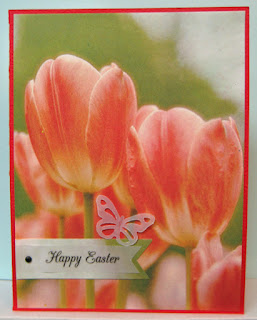 In comparison, this card was easy!!  I trimmed the tulip image from the large card, added a layered greeting and a little vellum butterfly punchie!!
I used a scrap from the original card below my trimmed laser printed Easter greeting.  I used just a whiff of glue stick between the vellum and the decorative paper before I attached them to the image layer using a tiny black brad and trimmed them to the edge.  I glued this large layer to a red card front.  I punched the little butterfly from a vellum scrap and adhered it to the card front using a tiny strip of double sided tape which just highlights his body!!

Very happy with how these cards turned out and it was fun to reuse cards in my cardmaking!!

Therese
Posted by Therese at 5:18 pm No comments: