Created these house tags for a swap on one of my groups. Theme was Home for Christmas so I searched for images on a clipart CD until I found a couple that spoke to me and I created tags using them as inspiration!!
The first one reminds me that Christmas, at one time, was all about the basics - friends, food and family!! People were grateful to be home with a fire burning and loved to prepare good food and plenty of it so when friends and family dropped they could share from their bounty. Stories were told, experiences were shared and a year's worth of blessing would be acknowledged. It was all about getting together and sharing!!
To create this tag I applied white gesso to a book page and stamped it with a large background stamp to add texture. Glued it to the house shape and trimmed it to the edges. Outlined the house with a black Sharpie and added yet more texture with a fine tip Sharpie marker to the interior surface of the house. Added the heart and framed photo with 3D foam tape and wrote the words and hearts by hand.
The second one reminds me of Christmas when I was a kid. It was always exciting to see cars pull into the yard one by one spilling people, food and presents as they came. Often, people had traveled distances in cold and less than desirable weather to be part of Christmas at our house. Cars would be plugged in or run several times during their stay so they would start, in the well below freezing temperatures, when it was time to head home. We would go to church and open presents when we got home. We always hoped that our one big present would be one of the items we had picked out of the Sears catalogue after months of perusing and making lists. We played board or card games, ate sweets, played outside and went for walks or ice skating!! It was about family and getting together.
For this one I added a bleached navy cardstock to the top and bottom and layered colourful scraps in between. Over the center section, I added a strip of sheet music. I coloured the frame black, mounted the image and added it to the tag with 3D foam tape. Added stitching with a black sharpie on the light areas and with a white gel pen on the dark areas. The heart is also mounted with 3D foam tape and the words are hand written.
I am getting into the Christmas mood. Have been creating Christmas card all year long and just all kinds for classes during the month of November. This was a fun little project and I am happy with the way they turned out!!
Therese
Posted by Therese at 10:43 pm 2 comments:

I love this swirl embossing folder (Crafts Too)!!! You can check it out along with several others I have used at Ecstacy Crafts!!
I do find that you have to cut your cardstock just a slight bit over the 5.5" so the swirl pattern doesn't fall off the edge of the card but it is such a versatile design!! I used it last month for this card. I colour printed a vintage Santa from a clipart CD that fits nicely in the opening. Created the scallop greeting using a scallop punchie (SU) and a 1 3/8" punch (SU) to cut out the colour printed greeting. The metal embellishment used to be a brad but getting it properly positioned was going to be difficult so I snipped off its tangs and added 3D foam tape to the back which worked perfectly!! Another quick and easy card!!
Therese
Posted by Therese at 10:16 am 4 comments: 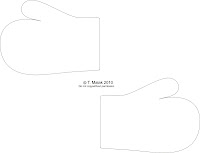 If you would like to make your own mitten Christmas cards here is the template I used to create mine. Click on image and download to your computer and print on a 8.5"x 11" sheet of cardstock!! Enjoy!
Angel policy: you can make cards for sale with this template. Please send your friends to this post on my blog to download their own copy for their use.
You do not have permission to copy and distribute this file in any manner and/or claim it as your own when submitting cards for publication!!
Therese
Posted by Therese at 10:05 am 2 comments:

Mittens!!!!!!! Have been wanting to make a shaped card for quite a while and finally just did it!! I created the mitten shape in a layout program (Corel Draw) and printed it on the back of the cardstock. Folded the card with the printing on the outside and cut out the shape. Added an embossed rectangle to create a cuff and added a snowflake border in white to jazz it up a bit. The colour printed greeting was distressed and mounted with 3D foam tape. Added snowflake punchies and a stitched border to the edge using a white gel marker!! Love it!!!
To top it off I added a "snowball" (white cardstock circle) to the inside where you can write your message!!
These are cute!! It is a real change from the standard Christmas card and would be great for those who are young at heart on your list!!
Therese
Posted by Therese at 9:37 am 1 comment:

I have been using my new tools!!
Here I used my largest Oval Nestibilities to cut out a winter scene I stamped in brown on white cardstock. I added a bit of chalk and a dotted border around the edge to just define the oval and highlight the image. Layered the image over scrapbook paper on a warm red card and added a colour printed greeting layered on brown with two silver brads!! Quick and easy!!
Themed packages of scrapbook paper are great for creating cards that have a coordinating look for making sets of cards!! Consider making a few sets for giving to those on your list that are hard to buy for or have everything. We all like to send special Christmas cards to our best friends and handmade ones certainly fit the bill!!
Therese
Posted by Therese at 9:25 am No comments:

Christmas cards!! Had a great class last night and they loved the cards!!
For these ones, I started with decorative scrapbook paper, added a red layer below, an ivory decorative strip trimmed with decorative scissors and a green ribbon!! The poinsettia is stamped in red and clear embossed on an ivory scallop (N)*. I added some green watercolour to soften the image a bit. The top one also has gold glitter glue added to the center of the flower and on each scallop for a bit of bling. It is mounted to the card front over the ribbon using 3D foam tape. The NOEL greeting (Quietfire) is gold embossed and punched out with an oval punch (SU). They are also embellished with watercolour to soften their look.
I like the soft muted look of these traditional Christmas colours!!
*Thrifty Tip - to save time when prepping for this class I embossed the poinsettia images in the oven!! Heat oven to 325F and place your stamped images with embossing powder on the back of a clean cookie sheet. Place in oven and 30 seconds later they are all embossed - a dozen at a time!! You have to watch very closely because if left too long the embossing powder will melt into the paper!! Great if you are embossing images for cards made in lots - Christmas, invitations, etc.
Therese
Posted by Therese at 9:02 am No comments: 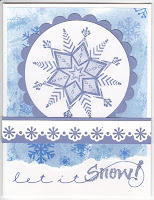 Decided to create a card for Class Act's contest and while I was at it made several - one for my group exchange on Tuesday and a couple for my CCE card exchange!
I love this snowflake image!! It is a Class Act image and they are having a Christmas card contest right now!! You just need to create a card with a Class Act or Chapel Road stamp and send in a scan. The prize is a rubber stamp - so in the end it is a win-win situation. You have one more card for your Christmas card stash and you could win more rubber!!
I stamped the snowflake on a white circle, embossed it with Stardust embossing powder, used my fun foam stamp* to add colour to the center and layered it on a blue scallop (Nestibilities). Started with a white card and added a greeting. The "let it" is a font to which I added a flourish and then colour printed on the white card. The "snow" is a Quietfire stamp which I stamped and embossed with the same Stardust embossing powder. I layered over that a decorative paper which I created. I first printed an all over pattern of snowflakes in blues like the one I used for this card and added blue watercolour washes using ink from my stamp pad. I ripped the bottom edge to reveal the greeting on the card. I added a layered white snowflake border (MS) over the scallop accent to finish off my card.
*Thrifty Tip - you can create your own stamps using fun foam!! Just cut out any shape, mount to wood or acrylic with double sided tape and use with your ink pads!! For the snowflake center I stamped the image on fun foam and cut out the center section. Works really well for highlighting that area. Consider using the precut fun foam shapes - snowflakes, snowmen, stars, hearts, etc!!
I am well on my way for having all my Christmas cards made for this year. There is lots of inspiration here if you need some quick and easy ideas. More coming in a bit!!
Therese
Posted by Therese at 8:25 am 3 comments: