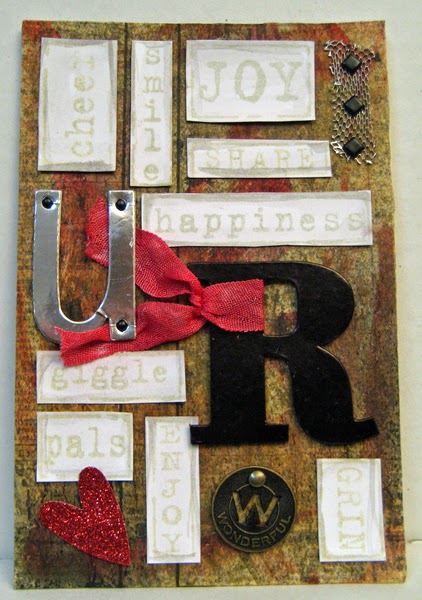 Happy New Year!!
Wishing you and yours every blessing in 2015!!

It has been a busy holiday season with not too much creative time but I did manage some crafting today.
On one of my groups we are considering a Tim Holtz monthly tag swap or challenge so I decided to see what I could create in the creative spirit of  Tim Holtz's January Tag!  I was not interested in copying his tag exactly so I decided to do a 4"x 6" postcard instead and liberally substituted what I had for what he used in the way of product and put my own spin on the elements as well.  I made a list before I headed to the craft room - tissue paper, paint, distress stains or spray, words, metal embellishments, glitter and seam binding which was my guide to the products which he used.
Tissue paper - I do have a wonderful piece of TH tissue paper which was gifted to me by my altered cuff swap partner and I set it aside in a "safe" place so I could use it for a project just like this.  Needless, to say today when 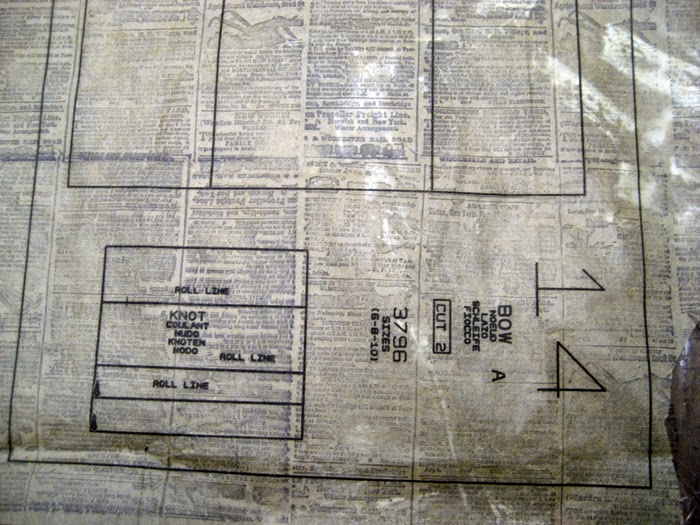 I could have used it, it was no where to be found.  I eventually gave up and dug out a piece of sewing pattern tissue and stamped it with a background newspaper stamp (IO) in black permanent ink to create tissue paper for my project. I could have chosen to create more of a collage look by choosing a variety of stamps instead.  I am happy with what I produced.  I did stamp a much larger piece than I needed so I will have some for future projects. 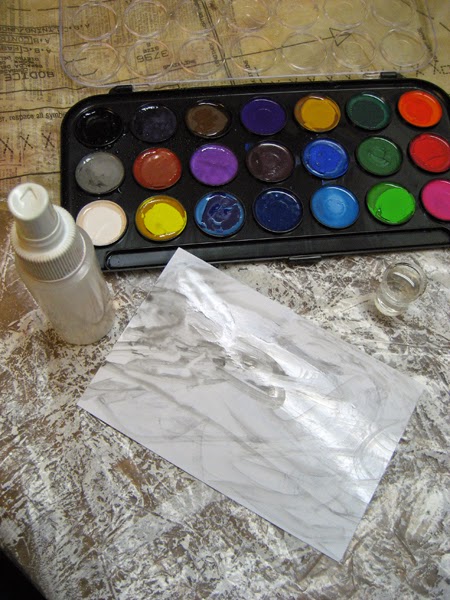 I started with a 4"x 6" glossy photo paper which I washed with some gray watercolour.  I have a few of these colour palettes which I used previously for classes that I will be using up in my projects this year in a effort of using up what I have. I applied glue to the whole front of my postcard, laid my piece of tissue over it and burnished it well.  Once it was dry, I trimmed all the way around with my scissors.  I chose a piece of tissue that was not too busy and featured only a few of the original lines on the sewing pattern. 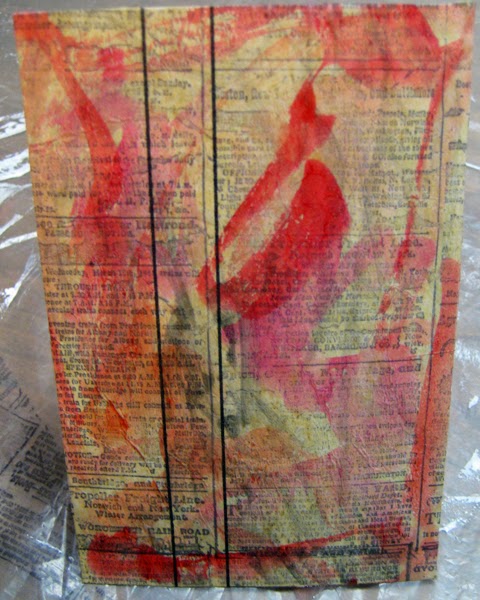 Paint was the next item that Tim Holtz used, so I just added some colour using the watercolour palette I had sitting there - mostly red and oranges.
Next, I went looking for distress stains or sprays.  I had purchased vintage inks from Stampin Up a while back and thought they would do nicely for the spritzing I needed to do next.  I mixed up some mahogany which turned out to not be as red as I had expected and then dried lighter.  I chose Tea Stain (SU) next and found that it just blended into the surface and did not show up at all.  Needing to add a bit of colour I decided to use Charcoal.  That did the trick - it added colour in some very nice splotchy areas along with some nice spattered sections. Just what I needed.  I tend to mix sprays as I need them instead of having some on hand.  I admit that it means that I don't use them as often.  Maybe this year I will use them more often by mixing more than I need and leaving it in the spritzer for next time. 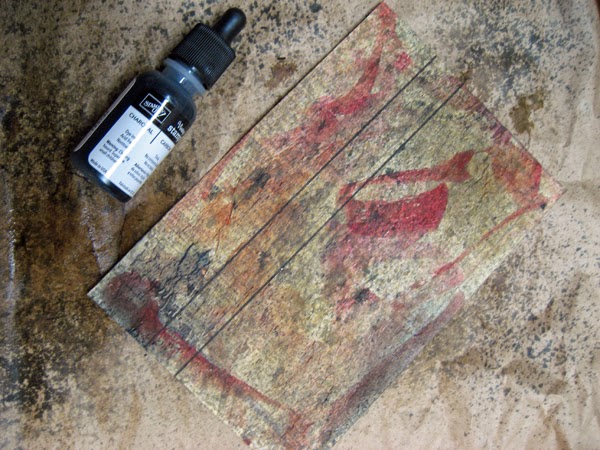 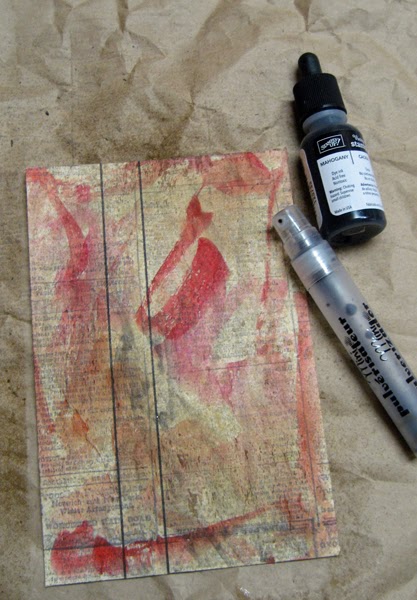 While the sprays were drying, I went looking for the other items I needed.  I found stamped words (SU) in my greetings bucket which I cut apart and trimmed.  I found a chipboard R which will work for one of my postcard swaps - bonus! Found some metal screening and a TH "wonderful" metal tag and decided that my next element should be a "U" which I die cut from shiny silver cardstock using a SU alphabet die.  When I checked the list I still needed glitter 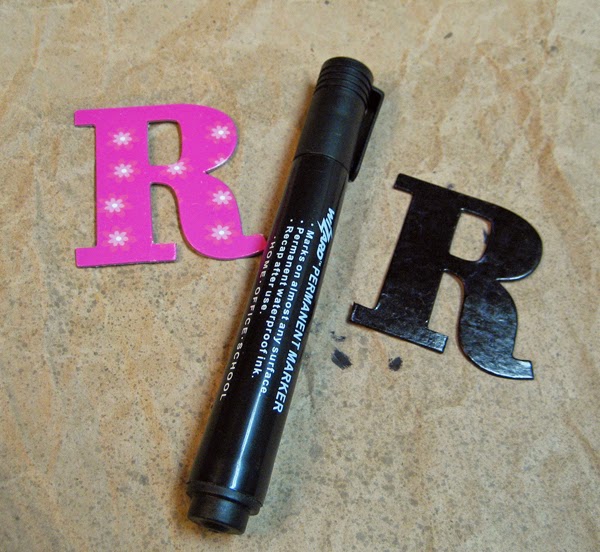 and seam binding so checked my heart bucket and found a red glittered heart and my stash of vintage seam binding and found some coordinating red seam binding which I had dyed for a previous project which was perfect.  I used a permanent black marker on the chipboard "R" - completely covering up the bright pink!!  Perfect!!
Once my postcard was dry I arranged my words, letters, red glitter heart and the metal embellishments.  I decided to tie the seam binding to the R which worked in all of my elements.  Once everything had a home I glued the words in place.  I used three black diamond brads to attach the silver metal screening,  a vintage gold brad to attach the round TH "wonderful" embellishment and three black mini brads to attach my "U".  I tied a short length of the red seam binding to the stem of the "R" using a double knot, attached it with 3D foam tape and tucked the seam binding ends in around the "U".  The glittered red heart was added using double sided tape.  The words seemed too stark so I used the same gray watercolour I had used on the postcard front and added several light washes to tone them down a bit. I also added a bit of black to some of them to better define their edges.
I am very happy with my postcard and having used the "R" I can use it for the postcard swap for the end of the month!!  So, a good use of my crafting time today as I managed to get the TH tag challenge done in the same project as the "R" postcard swap!!