Custom card for a couple celebrating 65 years of marriage! 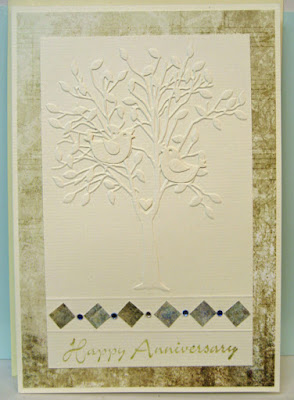 A friend asked me to make up a card for her Mom & Dad's 65 anniversary that included green and trees!!  Blue sapphire is the stone for 65 years so I incorporated that into my design as well.  I started with a large ivory card and added a layer of blue, brown and green decorative paper which incorporates musical notes.  I cut a middle panel which I embossed with a tree (Darice) on the top portion and stamped with a greeting in green on the bottom using my stampin jig to get it in just the right place.  In between I scored a couple of lines using my scoring tool from the back and added little squares with rhinestones in between.  I used one clear, two light blue and two darker blue rhinestones to bring in the "blue sapphire" theme.  The squares were cut from the bottom of the same page of decorative paper so coordinated sufficiently.  I trimmed the two little birds from a die cut that included a branch, wings and hearts.  I left their legs on and did not like the look so I trimmed them off and glued on the wings.  I set them in the tree both looking to the center.  I glued one of the little hearts into the crotch of the tree.  I wanted them to be subtle and am very happy with how it turned out!!!  I glued this focal central panel to my card front to finish off my card.  I have been brainstorming this card for a couple of weeks.  Sometimes it just takes that long for an idea to coalesce sufficiently to be able to create it!!
Sixty five years of marriage is an achievement and I wish them every good thing as they celebrate their lives together.

Therese
Posted by Therese at 2:25 pm No comments: