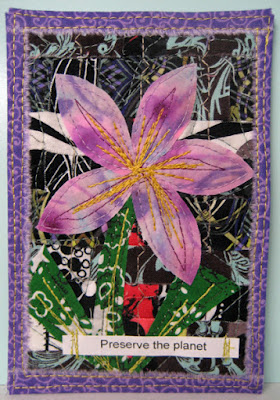 Time for another fabric postcard for my birthday swap on my group.  I started with a piece of this fabric collage which I created a while back using slim strips of fabric which I acquired in one of my thrift store visits.  In order to have the flower pop a bit I decided to use a piece of the wax crayon fabric I created a while back.  I like that it is a bit stiff because of the wax which means it cuts very crisply.  I hand cut the petals from the pinky purple scrap and laid them out on my collage background.  I dug in my fabric scraps to find some green for the leaves and chose this green and white one.  On hindsight, it does not have enough contrast when compared to the background.  It is a learning curve!!  I trimmed out by hand a stem and two leaves and put them on my postcard.  Once all the pieces were in pinned in place I started stitching starting with the leaves in dark green thread.  Next, I used a deep purple on the petals, then changed to a light purple for the perimeter and then used yellow to accent the center of the flower.  I really like how that worked out.  Then it seemed like the leaves were too dark so I added some yellowy green stitching to them which helped.  I added a layer of batting and a white cotton backer and stitched all the way around the edge and then filled in all around my flower in an all over pattern using a light teal thread.  I really like how that worked out as well.  The stitching does not pop too much but coordinates nicely with the background.  I auditioned several fabrics and chose this purple with swirls which worked well with all the elements for my binding.  I applied a strip of fusible webbing to the long edge of the scrap and trimmed it out with my ruler and cutter.  It was long enough to binding all the way around the postcard so I trimmed out four pieces - one for each edge.  I applied the binding to the front by ironing it into place and turned over the postcard and fused the remainder to the back.  I repeated the same procedure for the other three sides.  I stitched all the way around the edge twice in a yellow green thread.  Really like this binding method because it is very neat.  I added a quote that was printed on an inkjet printer on fusible fabric.  I trimmed it out of the sheet, fused it to the postcard and added stitching at both ends.  Lots of fun to use the fusible fabric to create words that can be used on fabric creations!!  I have used stamps and ink in the past which I like as well but this method allows so much more flexibility in font size.  So now that it is finished I will package it up and send it on its way to arrived at my partners location in time for her birthday.
Therese
Posted by Therese at 3:45 pm No comments: 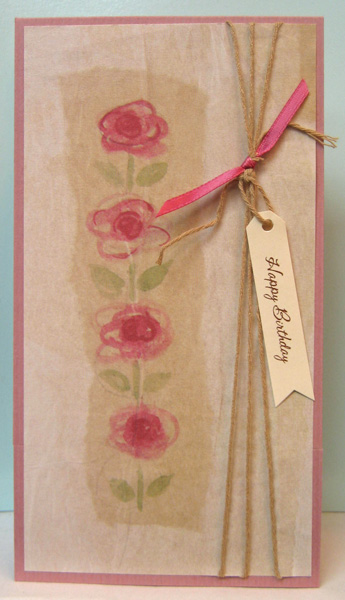 Another birthday card for the card set. Check here to see why I am making these cards and how I am destashing at the same time.
For this card I created a dark pink card front and adhered this piece of beautiful decorative paper to which I had wrapped and tied some natural fiber.  I trimmed the laser printed tag and added a loop of fiber.  I tied this loop into my last knot and then tied on a piece of pink 1/8" ribbon over the fiber using a single knot.
Very nicely done!!

Therese
Posted by Therese at 3:17 pm No comments: 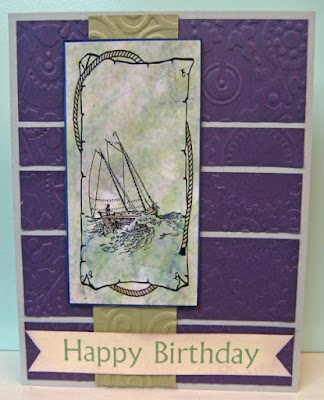 The nautical focal element for this card was printed on glossy photo paper which was coloured with water based inks then printed with an inkjet printer in black. The digital image is from Arthur's Clip Art.   I added a border on the image using a coordinating marker to just help define the edge and a bit of watercolour to the sea portion.  I cut a purple layer for the background and because it was a bit short on the bottom I cut it four times which made up the amount I was short.  I embossed the strips in a gears embossing folder and glued them to my gray card front spacing them with equal gaps. I was going to just layer the image over the background but it still needed something so I added an embossed strip of green cardstock below the image and that was sufficient to balance the layout.  I sponged a laser printed greeting with purple ink after flagging the ends and mounted it below the image over the last strip.  Another card for my stash!!!
Therese
Posted by Therese at 1:30 pm No comments: