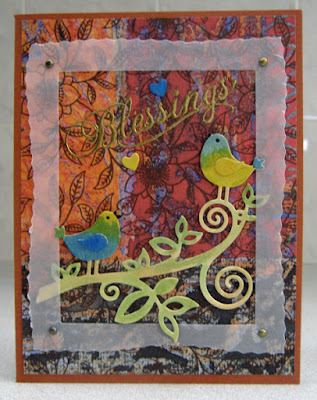 I made this card for my daughter and her DH for their anniversary.  I chose a burnt orange card and a coordinating decorative paper trimmed to leave a bit of a border.  I wanted to frame the focal element but the paper was too beautiful to cover up so I used vellum to give the effect I wanted without losing the look of the paper.  I stamped my "Blessings" greeting on the top portion of my decorative paper in copper and found that it blended too much so I reheated it and added gold which was much better - still subtle but visible.  I added the vellum frame which I created using a rectangle Nestabilities and then trimmed the outside edge with a wavy blade in a rotary cutter.  I attached it to my background using four tiny antique gold brads.  I die cut the little birds on a branch from ivory cardstock and then watercoloured the birds to reflect some of the blue in the background.  I mounted the die cut with some pieces over the vellum and others behind using small pieces of 3D foam tape behind the birds.  I was then able to add white glue using a fine tip applicator behind the main branch to secure it in place.  I used white glue to adhere the wings to the birds and the hearts around the greeting.  The little birds are very cute and I love how well they coloured.  I did add a bit of black cardstock behind the heads to get the eye to be black and also coloured their beaks black with a marker.                  Therese
Posted by Therese at 11:40 am No comments: