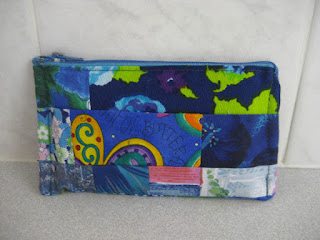 I have had the fabric for this case sitting on the ironing board for several weeks now and finally took the time today to sew up this little project.  I have been using the case my sister made since I got the phone from her.  It had a button closure and I would sometimes have it hang up on the button so I decided to make myself one with a zipper instead.  I chose a piece of fabric for the inside that somewhat coordinated with the pieces I wanted to quilt on the outside and stitched strips of fabric as wide as my base adding them incrementally by sewing the first two, folding the top one down and added another strips until I had the piece completely covered. 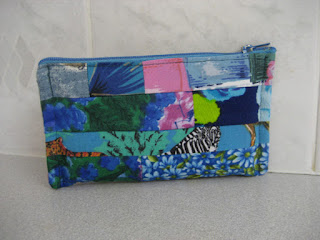 I folded over both top edges on one side and stitched in one side of the zipper and then did the same for the other side of the zipper.  Fortunately, the zipper was long enough to allow me to stitch in the pocket I decided to add to my case.  I simply used a folded piece of the lining fabric, quilted it so it would keep its shape and then added fusible webbing between the two bottom edges to make that nice and neat.  Next, I stitched this edge to the middle of my case on the side I wanted the pocket.  Next, I trimmed the ends, turned it inside out and stitched them up.  I turned the case outside out and then added a line of stitching on each end on the outside which 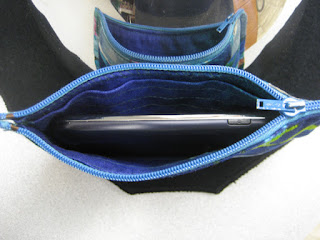 captured the seam allowances and left the inside of my case looking neat. I have enough room inside to add my headphones when I go to the gym and also a little room on the end for my little pointer.  I did have to hand stitch one of the allowances on the inside right next to the zipper to reduce its width because it was getting caught in the zipper as I open and closed the case.   I expect it will work very well and it certainly will store in my purse's middle section very nicely.
It took longer than I expected but that is par for the course when you are learning as you go.
Therese
Posted by Therese at 5:06 pm No comments:

Birthday card with flower die cuts, fiber and a bit of embossing 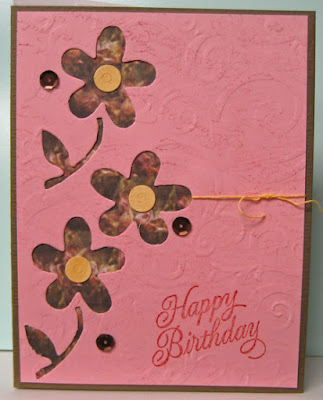 I was working on card kits for my class  and decided that this design would not work the best so I just made up the card.  I die cut the flowers on the left hand side of the pink cardstock layer. and then stamped the greeting in dark pink.   I added a bit of stamping in pink ink and some manual embossing to add texture to the layer before backing it with a dark floral scrapbook paper.  I added the little yellow thread afterwards so used a needle to get it between the layers which worked really well.  I glued the large layer to the front of a card brown card.  I added little yellow circles to the flower centers and three brown sequins to finish off my card.  Pretty happy with it!!!

Therese
Posted by Therese at 11:06 am No comments: