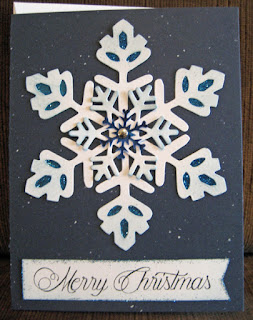 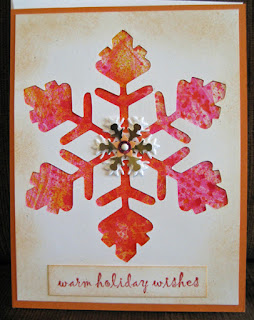 For these two cards I cut one piece of white cardstock  4.25"x 5.5" using a large snowflake die (SU).  Having carefully situated the paper on the die I was able to use both pieces - the die cut snowflake and the opening it created in the piece of white cardstock.
The first card features the snowflake die cut which I sponged a bit on the outside edges with blue ink.  I added regular tape to the back of the openings on the ends  and applied blue glitter from the front which nicely fills them with blingy colour.  I dug through my stash of precut snowflakes and found a medium sized one which worked so I sponged its extremities as well.  I added a blue snowflake sequin and adhered all of them together using a silver brad.  I adhered it to a navy blue flecked card and added a greeting below.  The greeting is laser printed, has a flagged end and was glittered all the way around with the same glitter used on the snowflake.  I used double sided tape on the ends and a piece of 3D foam tape in the middle and added it to my card for finish it off.  Love that navy flecked cardstock as it creates a night sky in a minute!!
For the second card, I used the piece of white cardstock which had the opening in it.  I trimmed it to 4" x 5.25" and mounted a very bright orange yellow and pink background which I created using alcohol and ink from leftover in the inkjet cartridges when we changed them out last time.  Love the contrast and how well the snowflake opening is highlighted.  I layered a pink round sequin, an orange flower sequin, a gold snowflake sequin and a fabric snowflake to create the 3D embellishment for the center which I mounted with a tiny white brad.  I found this stamped greeting in my stash, trimmed it to size and sponged its edges.  Next, I sponged the edges of the white layer to coordinate with the greeting and mounted this large element to the front of an orange card.  Added the greeting below the snowflake using double sided tape.  Love this card with its non traditional colour scheme!!    Therese 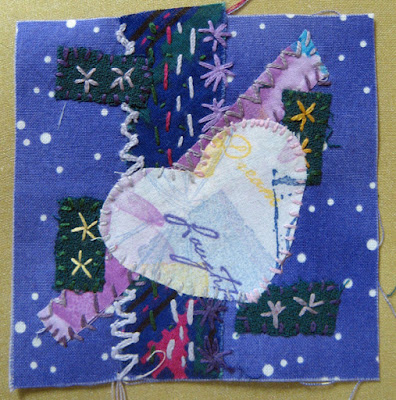 I have just recently completed my fourth little square of Slow Stitching.  I have used a new stitch - zig zag coral stitch.  The heart was handcut from some hand stamped fabric I had created a while back for a swap project.  I worked on this one on three different sessions.  I am really enjoying the process.

Therese
Posted by Therese at 9:29 am No comments: