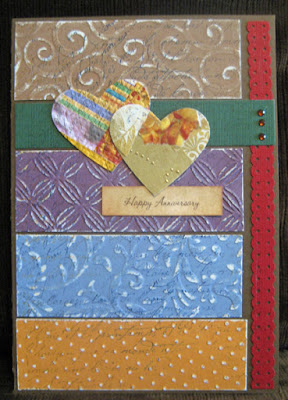 Our daughter and son in law are celebrating their anniversary this month and I have made up this card for them.
I started with a large envelope and created a brown card to fit inside.  I dug through my white core cardstock and found this similarly sized off cuts.  I embossed them with different embossing folders and then sanded their edges and middle to reveal the embossed design and them texture.  I adhered them to my card which left a gap perfectly sized for another scrap I had in my little stash.  I did not emboss the green one and trimmed it just a little longer.  I mounted red strip which was punched with the ribbon border punch from Stampin Up before mounting the green strip.  Thinking it needed a bit of something I stamped it with a script stamp (SU) in a dark ink which helped to unify the design.  I added two serendipity hearts punched with the SU heart punch over the green strip and then added three little brown rhinestones.  I found a coordinating greeting and mounted it just below the hearts.    Therese
Posted by Therese at 11:14 am No comments: