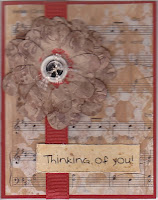 Made this card for an exchange with my stamping buddies!! I was late getting started so I used items that were close at hand - a paper bag flower I had received in an exchange on AFTCM, background paper that had already been clear embossed, at greeting from my stash of class leftovers and a ribbon just sitting from a past project!! I washed the embossed background paper and the greeting with walnut ink and let them dry while I found some red cardstock. It can together fairly quickly after that - cut background paper to size, glue to card front, add ribbon and glue to inside of card, mount flower with double sided tape and the greeting with 3D foam tape!! Done!!
Therese
Posted by Therese at 1:15 pm 2 comments: 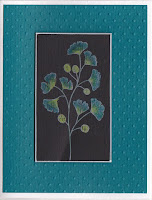 Love the look of this technique - Black Magic!! Again, discovered a tutorial at Splitcoast Stampers for this technique! It is so easy!! Stamp a solid style stamp on black cardstock using white pigment ink, heat set and colour with coloured pencils or chalk!! I am amazed at how great this image looks - the colours pop a little!! I outlined the black cardstock with white gel pen, layered it onto an embossed layer and then onto white cardstock!!
This one is a "quick and easy"!!! Enjoy!!
Therese
Posted by Therese at 11:00 am 3 comments:

Have been wanting to make large U cards for a while! I love the graphic look of the large letter U and in this case I let each person customize their card by adding whatever colour they wanted to their black and white card elements!!
For the birthday one on the left - I created a happy birthday element by pairing two fonts, printed a large U which I coloured using colour pencils, a #2 to complete the greeting and continue with the graphic nature of the card and a birthday cake (downloaded from here) embellishment which is also printed and coloured with colour pencils. For the Valentine's card on the right, I used an initial font (Cheltshire Initials) to create the "LOVE" decorative element and added a printed heart embellishment - all coloured with watercolours. The backgrounds are printed as well using a stippling digital stamp that I downloaded off of my sister's blog.
So a card created using digital elements that has very much a handmade look!! Valentine's is the next "big thing" and I am ready with a card for my DH!!
Therese
Posted by Therese at 10:40 am 3 comments: 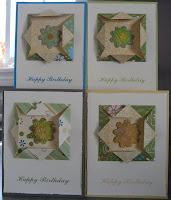 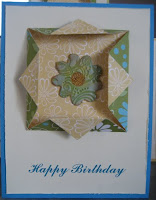 This card features a pop up frame working well with my theme of adding dimension!! I had seen a card with this frame on a card at Splitcoast and so set about replicating it and later discovered that they had a tutorial for creating it. It does require a ScorePal which I do have so in the end I would have had to work it anyway!! I started with a four square of heavyweight double sided decorative scrapbook paper. If you are making more than one of these the size works well into a sheet of 12x12 scrapbook paper. By working with a scrap piece of bond I discovered that I needed a square just a bit bigger than 2.75" to score the lines for the folds in the right place. So I cut cereal cardboard to the right size and placed it 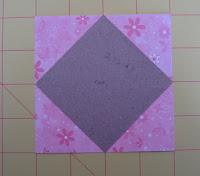 diagonally on my square. Originally I was marking the two opposite sides of the square so I could ensure that my square was correctly positioned but a few in I realized that I could use the grid on my cutting mat to line up the centers of the sides with the points of my diagonally placed square - too easy!! So the process of scoring them went much more quickly after that. Once I had the square scored I folded all four corners into the middle and adjusted the fold a little to make sure that my corners were nice and tight. Then, all you have to do is fold the points back to the middle of the side to get your cute little pop up frame. I added a colour printed greeting on a neutral layer and added that to a colourful card front.
Thrifty Tip: I also created the cool little dimensional embellishments which I placed inside the frame. These are fun foam shapes all dressed up!! I used a flower die to cut the fun foam, added some pigment ink to coordinate with my paper, poured on some clear embossing powder and heated it with my heat gun. The fun foam with curl and shrink when you heat it. To create the dimension I used a flourish rubber stamp coated with pigment ink to impress the fun foam while it was still hot. Makes very cool little embellishments that are very economical to create!!
Give it a try!!
Therese
Posted by Therese at 9:51 am 2 comments: 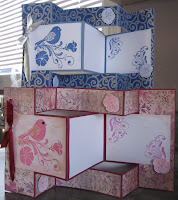 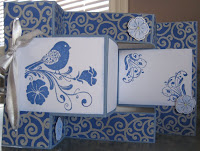 I challenged myself to create cards with dimension for my January cardmaking session so I started with a Tri Shutter card!! I have seen many of these cards in blogland and they are always impressive so I decided to give them a try. I found a tutorial over at Splitcoast Stampers. I adjusted the dimensions to make it easier to create in class by making the top and bottom 1.25" (the width of my metal ruler) and then chose decorative paper that had no direction so I could cut all of my pieces from a 4" x 12" piece of scrapbook paper giving me three from one sheet of 12x12. Worked out really well!! Many of the ones I have seen have very little room to put a message so I used the middle section of mine for my message space and left it blank. I stamped a bird for the front and added flourishes to the back one where a greeting can be added. I stamped and coloured three small flowers to add as embellishments and added a ribbon on the front.
So if you have been looking at these thinking they are too complicated, I encourage you to give them a try. It does require measuring and cutting accurately but the putting together goes fairly quickly. There are many other ways of decorating these cards so Google it and/or check out the gallery at Splitcoast Stamper for some inspiration!!
Therese
Posted by Therese at 9:32 am 1 comment: