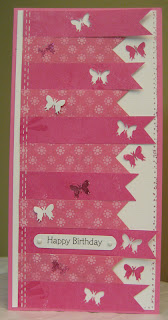 I created this card for someone special who is becoming a teen!!!  I used paper strips in two different pink patterns and glued them to a layer of white cardstock trimmed to fit on my pink card front.  I added faux stitching to the left hand side with a white gel pen.  I trimmed notches into all the ends for a cool look.  I punched the butterflies out after I had glued down the strips which was not very convenient.  Next time I will position and trim my strips, mark where I would like holes and then punch each strip individually before I glue them down.   I added tape to the back of one of the punched holes and applied pink glitter to the front.  I applied glue through a stencil (punched shape in cardstock) and applied glitter to the glue.  Not the best result because my substrate was a bit too thick to get good glue coverage but it does add a bit of sparkle. I punched a few white butterflies and added them.  Also glued several of the pink butterfly punchies to the white layer and added some dots with a pink gel pen.  I added a window punchie greeting (SU) using two white brads.
I am really happy with how this card came together and I love the the look of it.
I started out wanting to use up some of my scraps - 3/4" strips which I had cut out previously for making paper beads for one of my classes last year.  I will be working on some other cards that feature strips in the next little bit!!

Therese
Posted by Therese at 3:00 am No comments: