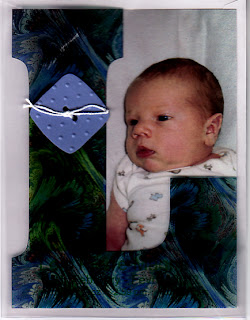 Our newest grandson!!  He was born four weeks ago and both Mom and baby are doing well.
The design of this announcement is a cooperative effort between my daughter, my sister and myself.  My daughter wanted a large letter on the front of the announcement and because of a short timeline I had to consider other options besides cutting them all out by hand.  We had hoped to use my sister's Cricuit to cut them but, unfortunately, because we could not adjust the aspect ratio of the letters we did not have a font that would properly fit the front of an A2 sized card.  During a brainstorming session with my sister she suggested using transparencies which is the route I chose and I am very happy with the way everything worked out.
Once I had worked out the lay out I hoped that my daughter could provide a photo with the elements  - baby on the right and something cute on the left that would be hidden below the stem of the L and only revealed when the announcement was opened.  Yeah!  She did it!!  Apparently, with the camera in one hand and the puppet in the other!!  I did digitally scale down the puppet and moved it over and down a bit so it would be completely hidden behind the L and was fortunate that the background was very forgiving!!  He is a cutie!!
So after digitally modifying the photo I added his name and stats below it  - covered by the bottom part of the L in the scan.  Printed them all on heavy weight laser copy paper and trimmed them.  I also printed a backer with a welcome from the rest of the family - Mom and Dad and his brother and sister!!  The large L was adjusted to fit perfectly on the front and filled with a "marbled paper" background which I found in Corel Draw then colour laser printed on laser transparencies.   I used brads to assemble the pieces as I did not want any glue to show.  I put the brads in from the back and covered the tangs on the inside with diecut embossed buttons to which I had tied some white cording.  I also added a large one to the front for a bit of texture!!
So we welcome another member to the family.  We have grown by one every year for the last five years!!  We are grateful for the new little people that we will watch grow and for their parents who have chosen to bring them into the world.  It is the circle of life!!

Therese
Posted by Therese at 2:29 pm No comments: