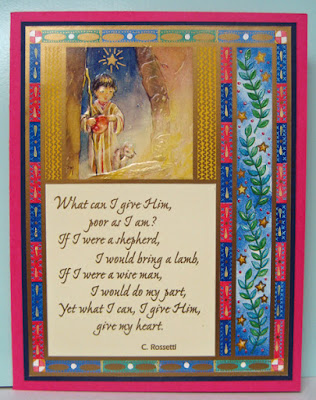 A few more cards!!  This top card was simply trimmed from the original, layered onto navy blue and then onto pink.  Easy, peasy!!
For the next one, I trimmed the torn off back from the front and trimmed the bottom edge using scallop decorative scissors.  I pierced each scallop with a push pin to add texture and then used my pattern tracing wheel to add a pierced line to the other three sides and then three more random ones below the Joy to the World greeting.  I added a gold layer to this image.  I embossed a dark maroon layer and glued it to my dark green card.  I adhered the focal image to my layered card front to finish it off.
My last one started with a small card.  I trimmed off the torn back and then trimmed the green to be even all the way around.  I added a gold layer which I trimmed leaving a bit of extra on the right hand side which I trimmed with the scallop decorative scissors, pierced each scallop and then added an embossed line between them and the image to nicely finish off this layer. I glued this large element to a maroon card front.  Therese 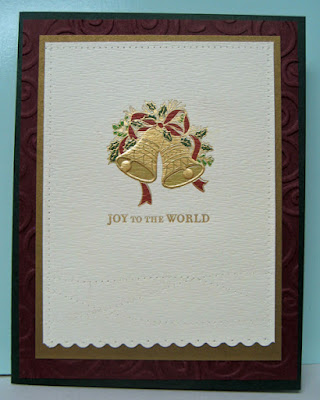 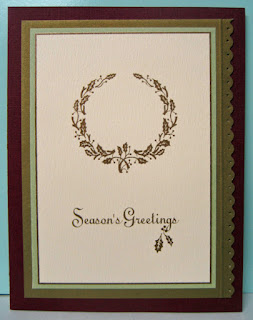 Posted by Therese at 9:23 pm No comments: 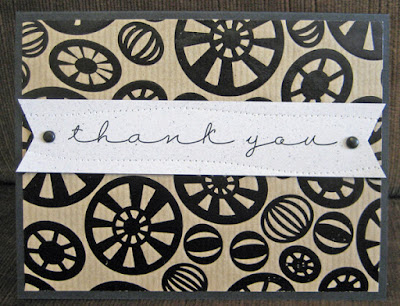 I always appreciate having card kits on hand because when you need cards on short notice you don't have to start from scratch to get some cards made.  I made this card for a friend who invited us for dinner and I know that always appreciates handmade cards as she is always blessing those around her with special greetings.
For my thank you card I dug through the stash on my desk to see what I had that would work together!!  I found the greeting first. I trimmed it's ends and ran the tracing wheel over it to give it some texture.  I found the background and the black card in my little stashes of precut papers on my desk.  Too easy!!  I layered the background onto the front of my black card and decided to add two black brads to my greeting before adhering it to my card using 3D foam tape.    Therese 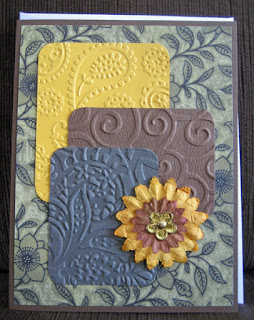 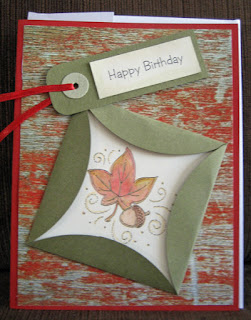 The first two cards were made up from card kits from the September cardmaking class.  You can check out the details here and here. 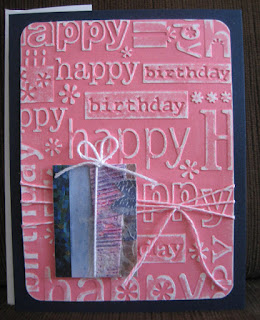 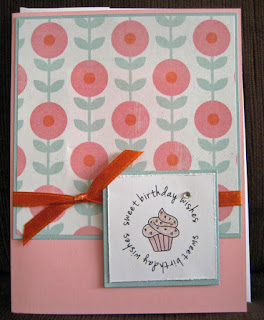 The one on the right was part of the January cardmaking classs and you can find the details here.

The second one is also from the September cardmaking class and you can find the details here.

Posted by Therese at 3:43 pm No comments: