Little pick up truck cards for Valentine's and birthdays

My sister bought the stamp and die set for the little pick up truck a while back and I have used it several times to make some little trucks for my card making!!   I made several in the last few days.  I used blue decorative paper to create the sky.  It is a very subtle floral pattern and works very well as it shows a bit like clouds.  I cut rectangles and glued them to the top of coordinating cards.  I sponged a green tree line on the top right and stamped pine trees on the other three.  I also added a torn strip to those three along with another green layer which I cut with my wavy cutter.  For the one on the top right I used a diecut green border which was cut from a green cardstock collage.  It works very nicely as well to create a tree line.  I embossed the bottoms with embossing folders that would created texture to simulate a road - distressed lines and some rough texture on the edge of one of Tim Holtz embossing folders.  I watercoloured the bottom edge of the trucks to coordinate with their colour and used a clear glitter gel pen to colour the lights, hubcaps, windshield, door handle and bumper.  I mounted the trucks with 3D foam tape leaving space in the back to add my accent elements.  I used punched balloons tied with thread for one, a variety of different sized and coloured red hearts for another one and created gifts for the other two.  I took die cut rectangles and tied thread to them from bottom to top tying a bow to finish them off.  I embossed afterwards which gave them much more texture which I liked much better.  The embossing did not bother the thread.  I mounted the gifts with 3D foam tape at the top edges and double sided on the bottom edges to keep them in place.  I stamped Happy Birthday on the bottom two and just added a few birds in the sky for the top two.
In the end, the truck filled with hearts can certainly be an anniversary card instead of a Valentine's one so I appreciate it's versatility.  Really love these cards and they are great for guy birthdays!!       Therese 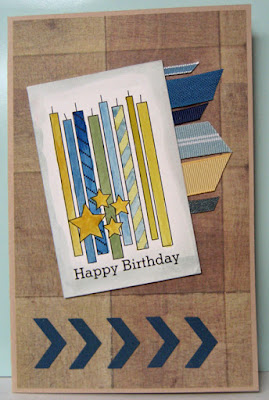 Working on family birthday cards!!  For this one I created a digital image of candles, stars and a greeting which was inspired by a card on Splitcoast Stampers.  I created it in Corel Draw and am happy with the way it turned out.  I laser printed several and trimmed this one from the sheet.  I started with a large envelope and created a beige card for fit inside.  I found this wood background paper in my stash and pieced it together to cover the front of the card.  I watercoloured my image to coordinate with the bits of ribbon I chose to create flags on it.  Once dry I added double sided tape to the back and added several lengths of ribbon which I trimmed to make a pleasing group.  I mounted my focal element to the front of my card with 3D foam tape and added the blue chevrons below.  They are punchies I found in my little container of fun shapes.  Love how it worked out!!
It is on its way today!!

Therese
Posted by Therese at 9:24 am No comments: