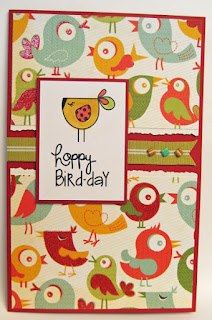 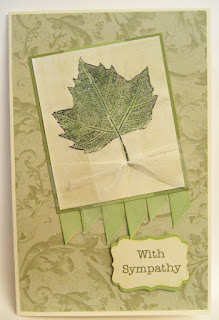 I made up a few large cards for my sister this week. She left her supplies here last year and I am attempting to make cards for her as often as possible.  I was headed to her house yesterday so I brought along what I had made.
The happy bird-day greeting is from Michelle Perkett and was so fitting to combine with this bird decorative paper.  I added a ribbon with three decorative brads in the middle and some ivory borders cut with deckle decorative scissors on either side of the bird paper.  I watercoloured the image and layered it onto red before adhering it to the front of the card with 3D foam tape.
The second card features some very soft looking green flourish paper over ivory cardstock which I combined with a softly watercoloured stamped maple leaf image.  I layered the image with green cardstock, added a length of ivory tulle which I tied on, embellished it with several points of green ribbon which I attached using double sided tape on the back and then adhered it to the front of the card using 3D foam tape.  I layered the punched greeting with a green one which I cut in half and adhered to the back before adding to my card front. 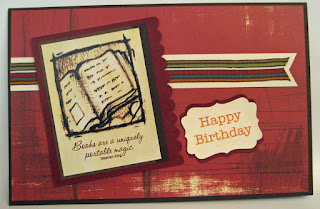 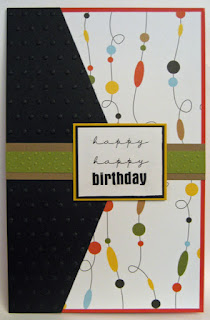 The third one features a book image from CLKER which I combined with the quote before colour printing it.  It was colour washed with watercolour and then double layered in brown cardstock and red decorative paper.  I punched the side of the red paper with a scallop punch (SU) and pierced the scallops with a push pin.  I combined a length of coordinating ribbon over a strip of ivory cardstock and flagged the right hand side.  I mounted it over the decorative paper and then adhered the layered image over it with 3D foam tape.  I layered the punched greeting (SU) and mounted it to the card front with double sided tape.
The fourth card features a simple laser printed greeting layered on black and then onto yellow.  I layered the decorative paper onto a red card front and then added the triangle which was a black cardstock which was embossed with dots offcut from a different project.  I thought it needed a bit of something between the black and the greeting so I added an embossed strip of green layered over a strip of kraft cardstock.  That worked perfectly! 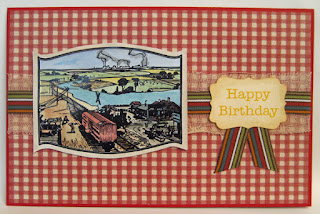 The fifth one features a CLKER image of a vintage village scene which I thought worked well with the gingham decorative paper.  I really liked the ribbon with the paper and image but it needed a bit of something behind it to add some texture and soften the look.  I found a roll of vintage white bandaging that looked a lot like cheesecloth in my stash so I dyed a couple of lengths of it with watercolour to coordinate and added that below the ribbon.  That worked!  I added a folded length of the same ribbon behind the greeting which I had also watercoloured and mounted it with 3D foam tape over the other ribbon.  Pretty happy with how all of these cards worked out!!  It has been a slow but sure process getting cards made for her but I do enjoy making the large cards and it is a different sort of challenge.  I have earmarked some large images which I gained from swaps years ago which I will watercolour  and add to the next set of cards I make for her.

Therese
Posted by Therese at 3:04 pm No comments: