Flip Flop card with a twist 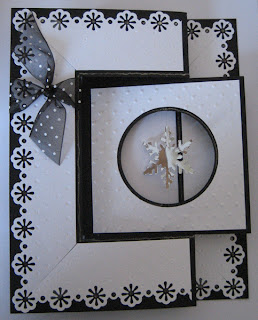 In one of my groups we are having a Flip Flop card swap and the theme is Happy New Year!!  I found this tutorial on Splitcoast Stampers which I used as a guideline for creating this card.  I experimented a lot with this design in hopes of being able to use a half sheet of cardstock effectively.  I did not success to get it working the way I wanted to so I just trimmed the middle section so it would fit inside the front and back sections.  I am sure there is a formula for how deep the fold has to be in comparison to the length of your cardstock for it to work perfectly but at this point I just needed to get the card done so I just made it work.
As you can see I went with a snowflake theme and punched my border with my Martha Stewart "daisy" punch.  I cut each piece to fit on the edges and miraculously the corners lined up with snowflakes in them so I just cut each of the pieces diagonally and mitered my corners.  I embossed them 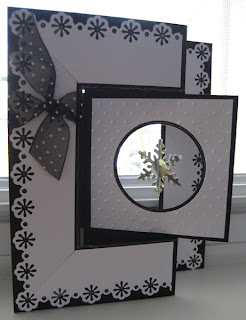 individually with my Swiss Dot (CB) embossing folder before gluing them to my card front.  With them in place I added sparkle in each snowflake and opening using my clear Stardust gel pen.  I added lines around my central panel, around the circle  that holds my snowflake and on the back around the punched hole as well.
In the center panel, I punched a 1.75 hole (SU) and then used a Nestibilities round die to cut a hole in the white layer so that a bit of the black would show then embossed it as well.  I punched two snowflakes (MS) from silver cardstock and glued them to each other sandwiching some clear thread between them.  I applied double sided tape to the edges of the hole - top and bottom - and centered the snowflake in the hole and pressed the clear thread into the tape.  I would recommend that you fold the thread over and apply another piece of tape to prevent the thread from coming out later.  I glued the white layer centered over the black opening which effectively framed my snowflake. 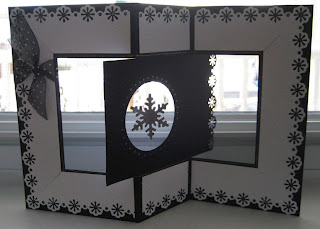 So, now I can twist the snowflake, lay it flat and insert it in the envelope.  When the recipient removes it from the envelope the snowflake will twirl!!  It happens very quickly but is ever so cool!!
Here is a link to video tutorial on how to create the twirling part of this card.
On the left you can see the back of the center panel which is what is revealed when you open the card by pulling the ends apart.  I did punch the back side of the center panel with my snowflake punch and added a double knotted ribbon to the front edge.
Pretty happy with this card!!  The black and white colour scheme does Happy New Year very nicely and the twirling snowflake is the little extra excitement that each new year should have!!  It will be off to my partner on Monday!!