A fabric postcard embellished with rick rack, stitching and an appliqued sunflower!! 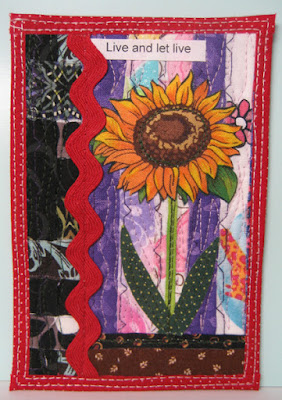 On my fabric postcard group, Trading Fabric Postcards, I have joined the birthday swap where we make postcards for each participant for their birthday - just over a dozen postcards for the year!! You can make the postcards any time provided you send them in time to arrive for everyone's birthdays.  I like that I can choose any theme or technique for the postcards which allows me to learn along the way!!  For this postcard I started with a section of this fabric collage which I made a while back.  It had a transition from dark horizontal strips to brighter vertical strips so I stitched on a piece of red rick rack to help visually divide my postcard into two areas.  I found the sunflower in my stash and fussy cut it out of the fabric after applying fusible webbing to the back.  I found a little strip of green and a small piece of dotted green from which I cut two leaves.  They didn't coordinate as well as I would have liked so I watercoloured the leaves of the sunflower, the stem and the two leaves until I was happy with how they looked together.  I added two layers to the bottom edge on the right to create "ground" on which to situate the flower.   Once the flower pieces were dry I fused them to the collage above the ground starting with the stem, then the flower and finishing off with the leaves.  I used dark green thread to add stitching to the leaves, the stem and around the center of the sunflower.  It gives them more texture and a bit more definition.  I added stitching to the ground as well while I was at it.  I cut a piece of batting and a white backer, layered them and stitched all the way around the edge in dark green and added lines of stitching in the dark area as well.  I changed the thread to a light purple and stitched all the way around the sunflower going up and down between the different pieces.  I auditioned several fabrics before I found this red one with tiny white polka dots which worked with the colour scheme of the postcard.  I applied two strips of fusible web to the back of the fabric trimming them out in between then cut out the pieces I needed to bind all four edges.  I positioned a strip on the front of the long left hand edge and fused it in place.  I flipped the whole postcard over and fused the remain piece to the back.  I did the same three more times with the pieces I had trimmed out.  I used white thread to add two rows of stitching all the way around to finish off my binding.  I added a little quote which was inkjet printed on white fusible fabric tucking it just below the rick rack at the top.  Very happy with how it turned out and now it will be mailed off to my partner in time for it to arrive for her birthday.     Therese
Posted by Therese at 4:30 pm No comments: 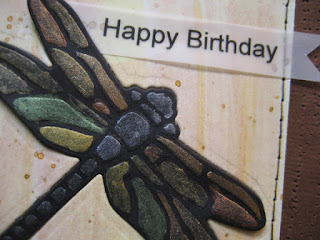 A few cards for my stash using a die which I have never used before.  This dragonfly is from a Spell Binders set called Bugs.  I added a black scrap between the die and the background so I cut both pieces at a time - the hole and the dragonfly.  The extra layer helped to emboss the black layer with the detail on the die.  I left the black layer in the die and watercoloured it through the openings using shimmery watercolours.  They look great!!!!!!!!!  I used some background paper I found in my stash.  I think these pieces were backers on a calendar I got from my sister for Christmas one year.  They were way too nice to throw away!!   I trimmed the one piece down and the other into two which gave me three pieces.
For the first one I backed the dragonfly opening with gold gift wrap, stitched it to a brown layer which was embellished with scallop decorative scissors and a pattern tracing wheel then mounted this large element to a deep yellow card front which I had stamped on the right hand side with a stipple stamp in brown ink.  I added a dotted flight path using a fine tip permanent marker.  I added a small laser printed vellum greeting inserting the one end into the dragonfly opening and attaching it with a tiny piece of double sided tape.  I added just a tiny bit of glue stick behind the writing to get it to lay down nicely.  I added a small strip of double sided tape to the body of the black dragonfly and adhered it in the opening on my card.  The wings and body are free so you can see the gold through the dragonfly opening.  The second one was created very similarly.  I used a large piece of gold giftwrap for the background which I border punched with a scallop punch.  I added two blue strips to my main focal element which allows the gold to show through the dragonfly opening.  The third one used a large piece of background to which I added faux stitching and the other elements were created in the same fashion as my first card.
There are a few more critters in this set and I look forward to using them in a similar way.  I have three dragonflies left over from these card which I will paint and use as embellishments on future cards!!

Therese
Posted by Therese at 12:10 pm No comments: