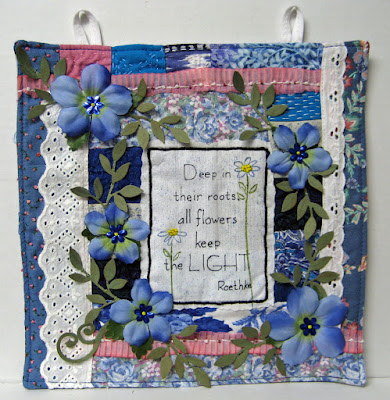 I have finally finished my wall hanging.  It has taken longer than I expected but there were several times in the creative process that I had to wait for inspiration to come.  That is as it should be!!
I started by sewing blue, pink and patterned fabric scraps together to create a panel in a bit of a log cabin style layout.  Next, I played with a variety of elements to see how and what I would use to create my piece.  I eventually decided to add my quote to a non running fabric (Windex wipes) using a fine tip Sharpie.  I printed rhw quote onto paper and was able to see it well enough thriough the fabric to trace it.  I trimmed the edges of the fabric, stitched it to my panel and then used the overcast stitch with black embroidery thread to secure a larger fiber over the machine stitching.  Two squares seemed quite jarring - they were pretty much too light for the rest of the piece so I watercoloured them in blue, masked them off and added stippling in navy ink.  That toned them down considerably.  I started auditioning trims and eventually chose the two pieces of cotton eyelet lace and the pink fabric trim.  The pink was not quite the right colour so I added a red acrylic paint colour wash.  That was better.  I sewed on all the trim using white thread in my sewing machine.  To add yet more texture I added some white hand stitching over the pink trim adding pink and white glass seed beads as I went.  That worked out very well.  Knowing that I wanted to add some floral elements I auditioned some silk flowers and really liked these blue ones.  I added blue flower sequins to their centers, some silk leaves in behind and added a tiny yellow seed bead to the center as I stitched them into 3D embellishments.  Next I played with placement of my flowers until I was happy with the layout.  Two of the smaller ones were used to disguise the two squares that had been toned down as they still contrasted too much with the rest of the piece.  That worked out well.  Before sewing on my flowers I played around with how I would finish off the edges of my hanging.  I finally decided to lay the front face down on the back and stitched around the edge leaving a gap to turn the whole thing inside out.  I did remember to add two white bias tape loop hangers to the top before I stitched it up. Very happy with how that worked out!!  I stitched up the gap, pressed everything very well and added a row of machine stitching all the way around the edge which stabilized it very nicely.  As I was getting ready to add my flowers I decided that the quote needed to have some flowers on it.  I dug through my stamps and found this doubled ended flower stamp (SU).  I coloured the areas with markers, huffed on it and stamped them in place - one on the left and the other on the right.  To add texture, I added french knots to the flower centers.  Very happy with that!! Next, I thought maybe the back and the front needed to be attached more closely than only on the edges so I added hand stitching (not all the way through) to all the pieces generally adding thread in the same colour as the fabric was printed so that the only effect I created was texture on the fabric.  I added pink french knots to the little roses on the fabric on the left hand side.  I like the way that turned out!  Finally it was time to sew on my flowers!!  I stitched them on by hand using yellow embroidery thread.  The result did not please me as much as I had hoped it would.  It still needed a bit of something!!!  I auditioned a wide variety of options and finally settled on leafy green cardstock die cuts.  I watercoloured them with yet more green, dried them and moved them around my flower until I was happy with the layout.  I took a photo with my camera to use as reference before I stitched them around my flowers.  That was much better!!!
Here is a photo of the first one I made where I used much more of a collage technique. 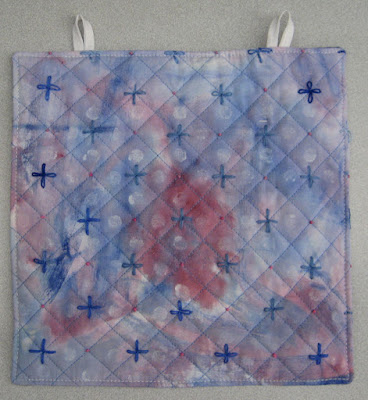 Here is the back of my wall hanging.  It features hand painted fabric which I made myself.  I started with a piece of white cotton to which I applied several colour washes of acrylic paint in pink and blue. Once dry,  I added a layer of batting which I stitched into place using blue thread in a diagonal grid pattern.  I added white dots to each space using acrylic paint and a little round foamie dot.  I added four blue loops at every other intersection and pink french knots in between.  I had made it large enough so I could  just fold over the edge and stitch it in place had I decided to finish it off that way.
I am happy with my wall hanging!!!!  I will be writing my credits on white cotton, stitching it to the back then packaging it up and it will be off to my swap partner on Monday!!