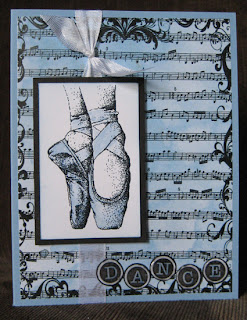 Another pop twirl card!!  A completely different theme and I was able to get my twirling element to be hidden inside the card!!
The music background is from Free Vintage Digistamps which I colour printed and glued to my card front.  The other two digital images I found at Pure Clipart and at Clipart Monster Club.  I added DANCE using embellished letters.  I created these typewriter letters years ago which I laser printed and punched out using my 1/2" punch.  I watercoloured them and added Dimensional Magic to finish them off nicely. Once dry I used glue dots to attach them to my card front.  Added my coloured image with 3D foam tape which overlaps my white seam binding that features a simulated bow.   To simulate a bow, simply tie a short piece of seam binding with a single knot to the long piece that has been attached to the inside of the card.  It can easily be adjusted by sliding along the ribbon. 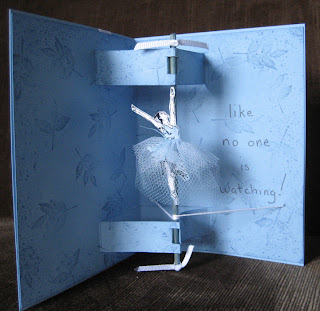 On the inside I added a bit of sponging and stamping and some handwritten words - "like no one is watching".  I cut out the little ballerina and sewed her a skirt using blue and shimmery white tulle!! I love how she turned out.  You can see a close up photo of her below.  I had to be careful not to trim her too close so I would have enough room to add my trimmed glue dots which attach her to the bamboo stick.  She is also watercoloured. I added tied ribbons to the ends of the stick to keep it from slipping through. She twirls beautifully!!
I made my pop ups a little less wide to accommodate the height of my ballerina and  if I were to create another one of these I would stick with the 1" ones as they are more sturdy and make a my card taller to fit all the elements. 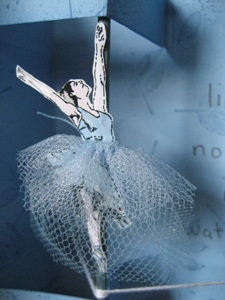 I would highly recommend trying out this fun card!!  I expect it will take a little more postage to send but I think totally worth it for the fun and movement it provides.  So many possibilities!!

So now to decide which one to send to my swap partner!! 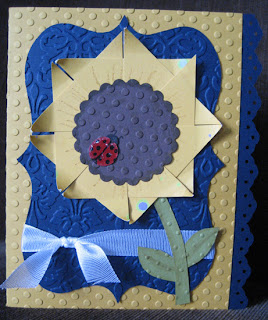 Joined a card swap where I had to create a pop up twirl card.  Unfortunately the swap was cancelled so I contacted one of the girls who had signed up and we are swapping One for One!!
You can check out the tutorial on Splitcoast Stampers.  It is not really complicated but does require precise cutting to get the mechanics to work.  It is really fun because the inside element pops and twirls!!  Check out the video at the bottom of the tutorial to see how cool it looks!!
You do need to use sturdy cardstock and the two full layers just  like the tutorial indicates because there is a fair amount of torque on the cardstock when the twirling is happening!!  Be sure to glue them together well.   I used strips of paper instead of buttons on the bamboo stick - just made a paper bead on the stick.  Saw this idea somewhere else on the internet and thought it would be a better option for a card that is going to be mailed.  My twirling element stuck out of my card so I added two border punched strips which worked out really well but it does 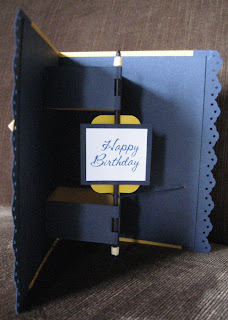 mean I will  have to mail it in a larger envelope.
I embossed the whole card front.  I have a  piece of cutting pad for my Big Shot which is the result of having broken a plate, which I use for embossing only parts of an embossing folder.  In this case, I embossed three quarters of the front using the embossing folder and then moved it over aligning the dots so I could emboss the remaining quarter.  Had I used a full plate one row of dots would have been squished by the flat edge of the embossing folder.  Instead I used my partial cutting plate and placed it on the embossing folder so it did not impact the edge of the embossing folder.  Magically, no flattened spots in the middle of my embossed card front.  So hang on to the pieces of your next broken cutting plate for using this way.  I added an embossed TH Ornmental Label die cut with white seambinding and a simulated bow.  I created the sunflower using this template and triangles created by cutting  1 3/4" squares diagonally.  I curled the ends with my scissors for a bit of dimension and added a bit of watercolour in the center.  The center is a brown scalloped circle (NS) embossed with dots and features a little lady bug I created using a red 1/2" punchie for the body and a black 1/4" black punchie for the head.  I added the spots with a black Sharpie marker and added clear dimensional paint for dimension and shine.  I hand cut the stem and leaves and watercoloured them a bit after I embossed them.
I am making one more of these to see if I can keep my twirling element inside the card!!

Therese
Posted by Therese at 1:43 pm No comments: