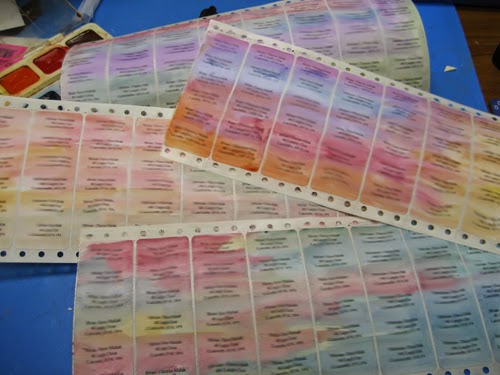 It was time to make another batch of address labels so I thought I would document the process to inspire you to do the same.
I started by printing my address onto labels. Mine are 1" x 4" and I have printed 6 addresses on each label.  I used a word processing program to lay them out and laser printed them.  I am using this size of label because we bought LOTS of them for a couple of bucks at a garage sale years ago  - they are plentiful and inexpensive!!
Once printed I apply watercolour to them in a variety of colours using a large watercolour brush.  A person could just a easily sponge them with ink, rub them with chalk or colour them with pencils or crayons, etc!!! 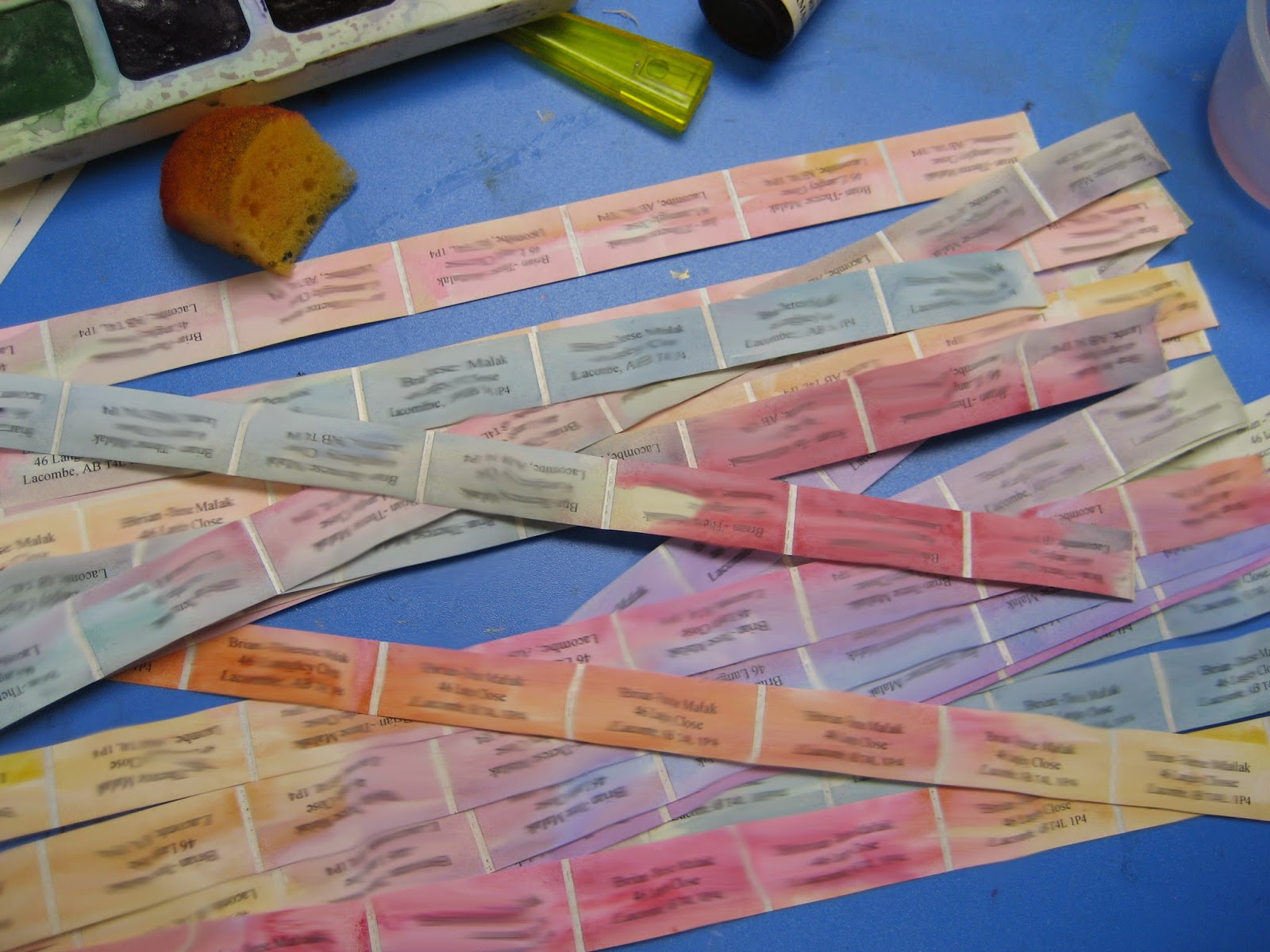 Once they are coloured and dry I used my paper cutter to cut them apart which gave me strips of address labels in a wonderful variety of colours!!
Use what you have!!  There are a wide variety of labels available so pick what suits you and use a word processor to organize your addresses and print the labels.  Then, have some fun and make them pretty any colourful way you wish. They will be unique and the next time you make a batch experiment with a different colour medium or a different technique to make them all together different if you wish!!  Just another way to be creative!!

Therese
Posted by Therese at 8:40 pm No comments: 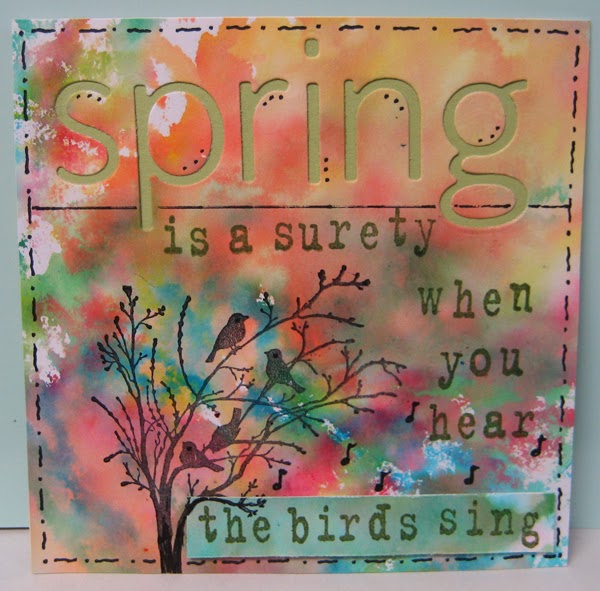 Created this 4" x 4" chunky book page for a swap on one of my groups that was themed - spring, green and watercolour.  I started with a piece of watercolour paper which I created when I was playing with waterbased markers for this project. I cut it to 4" square and used a set of Cookie Cutter alphabet dies to cut out the word spring.  I do not own any of these dies but my daughter lent a couple of sets last week so I decided to play with them today.  Very cool!!  My sister, Sylvia, has been using her SU Alphabet framelits set to create these and these cards.  I do have a set of alphabet punches which I have used several times which gives a similar look but is smaller and a bit less versatile.
I layered a piece of green cardstock on the back and glued it into place being careful to ensure the glue would not show through the letters.  I added glue to the three fall out pieces (one on the P and two on the G) and repositioned them in the letters then into the holes so they would be properly aligned in the word.  Once they were dry I removed the letters.  Excellent!!  I stamped the silhouette of the birds in the tree (SU) in black, doodled in the border and the dots on my letters using a black fine tip sharpie and added the wire using the same marker.  I made up this quote and stamped it on my page using dark green ink and my Making Memories magnetic alphabet stamps.  I had to use my homemade Lego positioning jig - see it here - to ensure that the first line ended up between the letters.  I had been wondering what I was going to use to add a bit of dimension to my project but it all became clear when I stamped the last three words upside down.  I restamped it on a scrap of the same watercolour paper, trimmed it to size and used a few pieces of cardstock to elevate a bit from the page's surface!!  I used the fine tip sharpie to add the branch in the corner and some music notes among the words.  I used a piece of cardstock which I had scribbled iall over n green gel pen to create my back.  I applied several washes of watercolour which highlighted the gel pen because they resisted the colour.  I glued my back to the front, added the same border and my credits and it is ready to be mailed off to my partner!

Therese
Posted by Therese at 2:02 pm No comments: