Exchange card featuring my digital daisy image, a line of mosaic pieces and a bit of ribbon 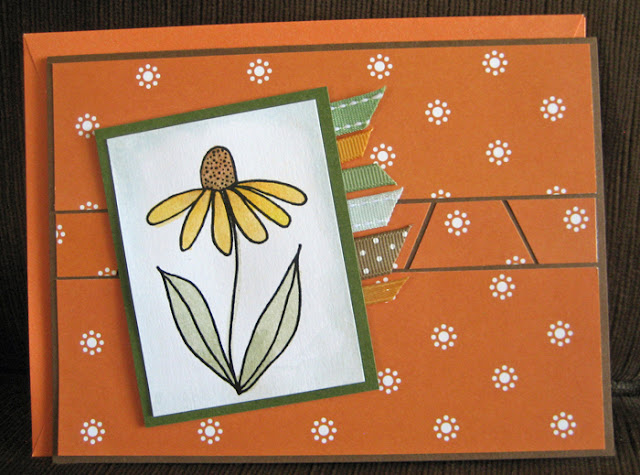 I am late with my July card exchange cards and with a days break from summer activities I thought I would get some cardmaking done!!!  This card features a digital image of a daisy which I drew myself while I was doodling along with a doodling video on YouTube!!  I scanned the page of images I drew and isolated a few which I saved as individual images.  I did a bit of digital clean up on several of them and then laser printed them.  Pretty happy with how they worked out.  I will probably be doing that again so I can use some of my own images in my cardmaking!!
I started with a large orange envelope from my stash and created a warm brown card to fit inside.  I layered it with this fun orange scrapbook paper.  It was not quite wide enough to for the card so I trimmed a piece from another scrap and because it was not quite long enough I used a pair of scissors and trimmed it into pieces and glued them into the gap between the other two pieces!!  I like the look of a sort of mosaic between the two.   I watercoloured my laser printed image which was trimmed from the large letter sized sheet I printed several on and then I layered it onto a green piece of coordinating cardstock.  I added a piece of double sided tape and placed six little pieces of ribbon into it to create a bit of texture on this card.  I really like how it turned out and will be using the concept of a line of mosaics on future cards!!      Therese
Posted by Therese at 4:53 pm No comments: