Fabric postcard with a cardinal 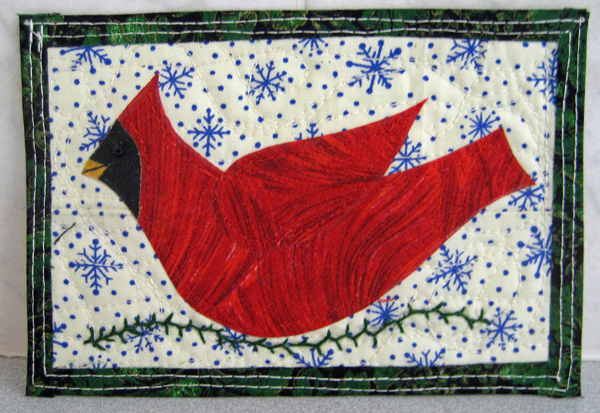 I created this fabric postcard for my birthday exchange on one of my groups!!  My partner's birthday is on Christmas and I thought that a cardinal would be appropriate so I went looking on line for examples of how others have featured cardinals on quilting projects.  I found a few ideas and a few patterns.  The one I found could not be printed large enough so I just hand drew the shapes by hand on scrap paper.  It was too big for the postcard so I redrew it with better guidelines which worked much better.  I found this great red fabric (4"square) in my scraps and traced my drawing onto it placing the wing above the back as a separate piece. I used fusible web to back both pieces and the worked on the small pieces for the beak and the face.  I backed them with fusible web as well and ironed them onto the bird.  I added fusible webbing to the wing too. Next, I needed a background and from my scraps I chose this beautiful snowflake fabric.  It was long instead of wide so I cut it in half and sewed the two piece to each other and trimmed it to 4" x 6".  I added batting and stitched all sorts of wavy lines all over it.  Next, I positioned the cardinal and ironed him into place and then did the same with the wing.  I added a line to the beak with a fine tip permanent marker and fused the wing into place as well.  That was looking like a cardinal!!  It needed a bit more definition so I stitched all the way around the bird and wing in red.  It does not show up as much as I had hoped.  I created a backer and stitched it to the back of my postcard starting with a trip all the way around the border and then an all over design around the bird.  Afterwards, I remembered that I had meant to add a tree branch of some kind and a black bead for the eye.  It was easier than I thought it would be to stitch in the branch with green floss and sew on the black bead for an eye.  It does not show up as much as it appears in real life.  I added narrow fusible webbing to the back of some green fabric and cut out strips to create my binding.  Once it was fused on the postcard all the way around I stitched it with ivory thread.  On hind sight, green might have been a better colour but that is the way it goes!!  I will be sending it off in time for it to arrive for her special day!!
Therese
Posted by Therese at 8:11 pm No comments:

Cards with embossed accent with ribbon 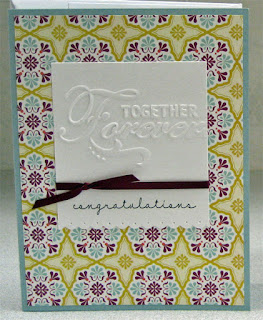 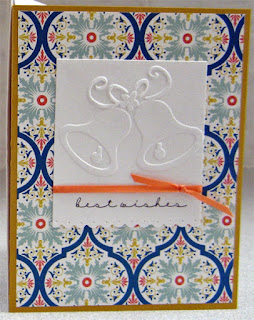 Here are a few cards I made up with all occasion greetings instead of Christmas for my class at the end of November.
I love versatile sketches!!
The little embossing folders are by Sizzix!

Therese
Posted by Therese at 9:32 am No comments: