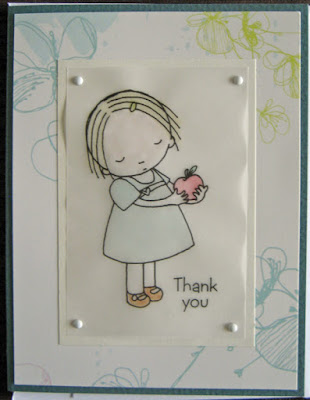 For this card I reused part of a larger commercial card for my background.  I found the image in my stash as well (Heather Ellis).  It is printed on vellum so I very carefully coloured it on the back using watercolour (markers or chalks will not wrinkle the paper) and layered it onto a an ivory rectangle before adhering it to my background using four tiny white brads.  I layered this large element to a coordinating card front!!!  I really love this cute little girl images because they work just as easily for little girls as adult women and almost anyone in the case of this thank you card.

Therese
Posted by Therese at 5:13 pm No comments: 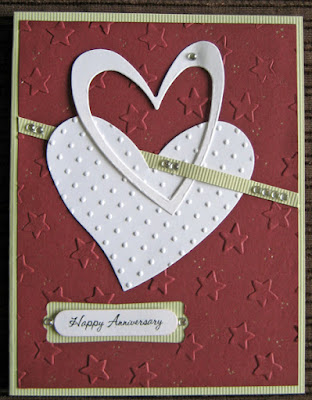 I like to feature hearts on anniversary cards and am always looking for new ways to feature them.  I had these cut and sitting on my desk from this card from my All Occasion Class.  I decided to layer them and then wanted a way to interlock them so I dug through the scraps sitting on my desk and found this little strip which did exactly what I wanted.  I decided to layer them onto this dark red colour which I embossed with stars instead of hearts which was my original intent.  Somehow, I just could not do the hearts and the stars were calling to me.  So hearts it is!!  I glued down my hearts and then punched out an opening using my Modern Label punch (SU) just below the bottom of the lowest heart.  I glued this large element to a green card front which coordinated with the strip I used.  I added the little punched greeting into the opening using 3D foam tape.  the card still needed "a bit of something" so I added clear rhinestones to the strip and that was better.  After a bit of pondering I also added some to one of the hearts and to the greeting.  That was better but it still was calling for more bling so I added dots to the background layer using a clear glitter gel pen!!  That was better!!!  Always amazing how the muse calls and we are guided!!  Therese
Posted by Therese at 3:17 pm No comments: