Card kits - a quick way to make a handmade card 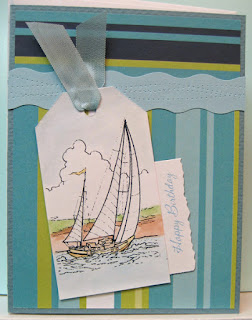 I made up this card from a kit from a previous class.  This is the last one from this class and it sure is nice to have had a few card kits around as it makes getting cards made so much faster!!
I started with two pieces of decorative paper which I glued to the blue card front.  I added the wavy strip over where they join which I trimmed using decorative scissors and added texture with my pattern tracing wheel. FUN!  I watercoloured the laser printed and die cut sailboat image (Arthur's Clipart) and added the blue seam binding on the top securing it with double sided tape.  I added the greeting which I had trimmed with decorative scissors by gluing it to the side of the tag with double sided tape.  I adhered the tag to my card front using 3D foam tape.
Do you every make up a few extra of a card when you are creating for putting together later??

Therese
Posted by Therese at 1:43 pm No comments: