A humorous Far Side Get Well card! 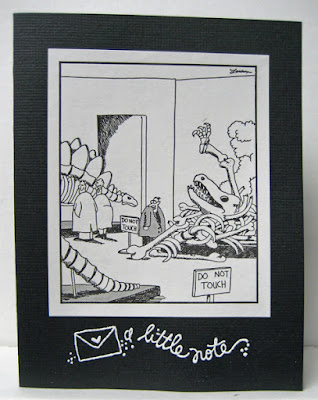 I created this card for my grand niece who is recovering from an injury to her leg.  She is a cool teenager and I hope she will appreciate this Far Side cartoon!!  I bought a 365 day calendar years ago and have about 363 more cartoons waiting for the perfect time to be used for some creative project!!!

I simply cut out the cartoon and layered it onto the top portion of a black card front.  I added the little greeting using a stamp and white embossing powder.

So be on the look out for a cool calendar this fall that will provide you with some cool images for cardmaking for the next year!!!

Therese
Posted by Therese at 4:52 pm No comments: 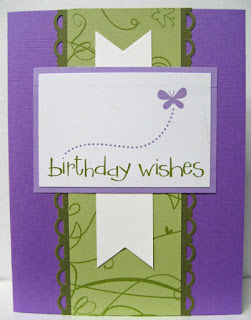 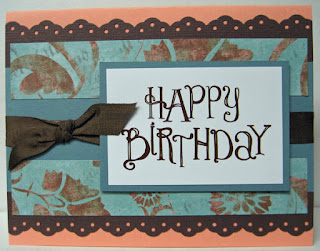 A few more One Sheet Wonder Cards!!  These are both using this template which I created a while back for my cardmaking class.  They both feature a 2" x 5.5" piece of decorative paper and a large laser printed greeting.

On the first one I added a dark green punched border (SU) on either side of the decorative paper and mounted this element to the center of a purple card.  I layered the greeting with light purple and glued it over the center element using double sided tape only on the sides.  That allowed me to slip my flag ended rectangle behind it and position it where it looked most balanced.  I flagged the ends of my 1" white piece of cardstock using my chevron border punch (SU).  The greeting is a digital image from Stampin UP which I coloured digitally to coordinate with the paper and cardstock.

For my second card, I cut the 2" x 5.5" piece in two and trimmed both of them to 5.25".  I border punched (SU) two lengths of dark brown cardstock with the eyelet punch (SU) and butted them right up to two strips of blue cardstock and then applied regular tape to hold them together. I glued the decorative paper strip to these elements leaving a border all the way around.  I positioned one element with the border facing up and the other with the border facing down on a coral card front.  I added a piece of dark brown seam binding in between which pretty much completely covered the coral strip that was showing.  I glued the ends to the inside of the card using double sided tape and then tied on a short piece to simulate a bow.  I layered my laser printed greeting (SU) with the same blue cardstock and then glued it to my card front using 3D foam tape overlapping the seam binding.
I love the versatility of using the OSW technique and once you have your sketches, being able to use scraps to create cards, which is what I did in this case.  The greetings and decorative paper strips were leftover from this cardmaking class.

Therese
Posted by Therese at 4:44 pm No comments: