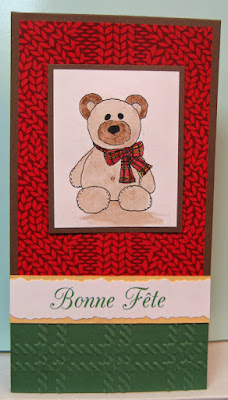 I have started a set of kid's birthday cards for my daughter.  I am using the #8 envelopes which makes tall slim cards.  I started with a brown card front which was a bit short on the front so I added a green rectangle which I embossed with a plaid embossing folder.  I added the red decorative paper which looks like a knit sweater on the top portion of the card front and adhered a yellow rectangle over where the card stocks join to hold them together.  I trimmed the laser printed greeting with decorative scissors, glued it over the yellow strip and then trimmed the ends to the edge of the card.  The little teddy bear is a digital image from Dearie Dolls which I laser printed on white cardstock, trimmed out of the sheet and watercoloured.  I layered it onto brown cardstock and glued it to my card front using 3D foam tape.
Not sure how many I will get done but it is a start!!

Therese
Posted by Therese at 2:18 pm No comments: