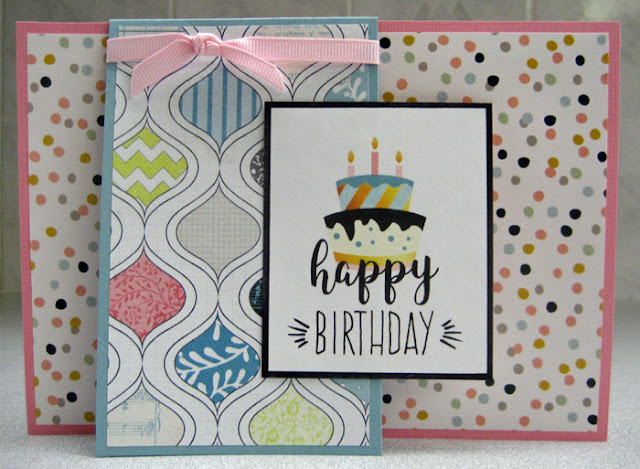 I am still at making front flap cards!!  For this one I started with a large envelope and created a pink panel card to fit inside.  I layered on the polka dot paper (SU digital - colour printed) which I trimmed to leave an even border.  I found a piece of blue cardstock that coordinated and then found a piece of paper that coordinated with both of them.  I scored the cardstock at a half inch from the top edge, folded over the little flap and then hooked it on my panel and trimmed the bottom edge.  I trimmed the piece second piece of decorative paper  to fit on the front of my flap with an even border.  The birthday greeting is one I downloaded from the internet and colour printed.  I used a large black permanent marker to colour all four edges of my image to highlight the greeting and coordinate with my decorative papers.  I mounted the cake image so it overlapped half onto the flap and I adhered it in place.  I added a length of pink ribbon at the top of the flap and tied it with a double knot.  Added a message area behind the flap using a piece of white bond.         Therese
Posted by Therese at 8:42 pm No comments: 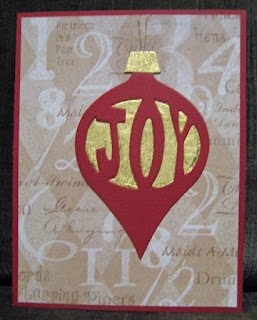 Another batch of Christmas cards featuring these red ornaments I cut a while back.  I coupled the ornaments with metallic/pearly papers.  Some are very bright metallic foils and others have a more subtle metallic/shimmery finish.  The ornaments were die cut with a Sizzix ornament die from red cardstock scraps.  I added metallic/shimmery accents - an oval behind the JOY (TH-SX) and on the ornament topper cut, trimmed and glued in place.  The oval is cut using an oval Nestibilities which is just the right size to fit behind the word!  Love it!!!!  The cards all have scrapbook paper backgrounds which I discovered in my stash of scraps.  Very happy to have another few Christmas cards made up.  I am keeping my commitment of getting my cards made before I need them in November!! 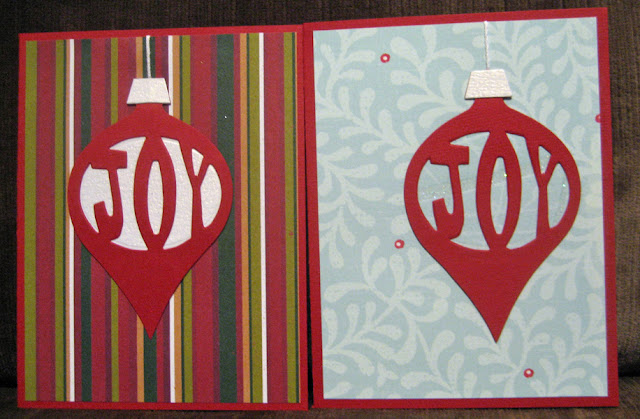 Posted by Therese at 8:25 pm No comments: